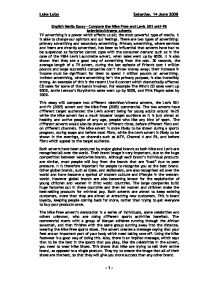 English Media Essay - Compare the Nike Free and Levis 501 anti-fit television/cinema adverts TV advertising is a power which affects us all; the most powerful type of media. It is able to change our opinions and our feelings. There are two types of advertising: primary advertising and secondary advertising. Primary advertising, where services and items are directly advertised, has been so influential that adverts have had to be suspended as factories cannot cope with the consumer demand such as in the case of the 1984 Levis Laundrette advert, when sales went up by 800%. It is also shown that they are a good way of advertising from the cost. 30 seconds, the average length of a TV advert, during the last episode of Friends cost 1 million pounds and large successful companies don't throw money away; their increase in income must be significant for them to spend 1 million pounds on advertising. Indirect advertising, where advertising isn't the primary purpose, is also incredibly strong. An example of this is the recent Live 8 concert which dramatically affected CD sales for some of the bands involved. For example The Who's CD sales went up 900%, Annie Lennox's Eurythmics sales went up by 500%, and Pink Floyds sales by 300%. This essay will compare two different television/cinema adverts, the Levis 501 anti-fit (2005) advert and the Nike Free (2005) commercial. The two adverts have different target audiences: the Levis advert being for young adults around 16-25 while the Nike advert has a much broader target audience as it is just aimed at healthy and active people of any age, people who like any kind of sport. ...read more.

The fact that feet are the main focus keeps on reminding you that Nike produce trainers, and other sports shoes. Even when you see the whole of people your eye keeps on darting back to the bare feet, because you don't expect to see them bare. Also the fact that there is lots of bright sunlight and everything is quite bright and happy gives the connotation that Nike creates happiness. The advert is arranged into a series of different sections, using montage editing. There are a lot of jump shots within the advert, such as when the gymnast starts to jump, but doesn't land until a few shots later, after a small amount of shots have been shown depicting other sports. There is also an image of continuity with everything linking up with other shots, sometimes using matched cuts and sometimes using jump cuts. Within the advertisement a wide range of different shots are used. The advert starts off with an extreme long shot and then uses cross cutting between the extreme long shot, and a close up of the feet. Lots of close ups are used within the ad, especially on the feet making them feet stand out, and ensuring that the message is explicit. There is a range of different angles used and this ensures that the advert is not boring. Different kinds of views help to build up attention. There are some shots where the viewers are behind the subject such as when the woman is climbing the cliff face. ...read more.

It uses white, simple lettering, and the Levis red logo. It is placed on a background of a sun, which connotes brightness and happiness, in full contrast to the rest of the advert. Both of the adverts are aimed at selling a whole brand. However Levis show what they are selling much more than Nike do. They both attempt to build up a positive image around their brand, Nike by being bright and happy, and Levis by implying that happiness comes as a result of wearing their jeans. There is a lot of difference in the settings of the adverts. Nike is set in many different places, but all of the activites which take place are likely to happen in real life. However, although the Levis advert is set in a real place, the actual storyline is quite unreal, almost a fantasy. Both adverts use music to great effect, but the Levis music is much more subtle than the Nike advert. I prefer the Nike advert, as I think that it is much more realistic than the Levis advert. It is also quite a catchy advert and stuck in my mind much more than the Levis one did. The Levis advert is edifying, because it definitely portrays the message of anti-fit and tells me that the jeans exist, but I don't think that it would make me buy Levis products. However some people would prefer the Levis advert due to the romance, and sophistication involved within it. Luke Lobo Luke Lobo Saturday, 14 June 2008 - 4 - Luke Lobo Saturday, 14 June 2008 - 1 - ...read more.