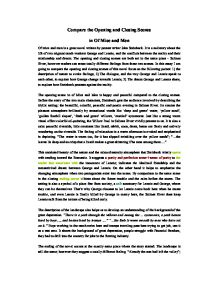 Compare the Opening and Closing Scenes

Compare the Opening and Closing Scenes in Of Mice and Men Of mice and men is a great novel written by protest writer John Steinbeck. It is a sad story about the life of two migrant ranch workers George and Lennie, and the conflicts between the reality and their relationship and dream. The opening and closing scenes are both set in the same place - Salinas River, however readers can sense totally different feelings from these two scenes. In this essay I am going to compare the opening and closing scenes of this novel focus on the following points: 1) the description of nature to evoke feelings, 2) The dialogue, and the way George and Lennie speak to each other, to explore how George change towards Lennie, 3) The dream George and Lennie share, to explore how Steinbeck protests against the reality. The opening scene in of Mice and Men is happy and peaceful compared to the closing scenes. Before the entry of the two main characters, Steinbeck gets the audience involved by describing the idyllic setting: the beautiful, colorful, peaceful and poetic evening in Salinas River. He creates the pleasant atmosphere brilliantly by sensational words like 'deep and green' water, 'yellow sand', 'golden foothill slopes', 'fresh and green' willows, 'mottled' sycamores. Just like a strong warm visual effect colorful oil-painting, the Willow Pool in Salinas River vividly present to us. It is also a calm peaceful riverside, little creatures like lizard, rabbit, coon, dears, heron are freely and actively wondering on the riverside. The feeling of relaxation in a warm afternoon is evoked and emphasized in depicting. "The water is warm too, for it has slipped twinkling over the yellow sands"; "...the leaves lie deep and so crisp that a lizard makes a great skittering if he runs among them...." This untainted beauty of the nature and the relaxed serenity atmosphere that Steinbeck wisely opens with tending toward the Romantic. ...read more.

When George found a dead mouse, he takes the dead mouse away from Lennie. This hurts Lennie' feeling and he starts to whimper. George "put his hand on Lennie's shoulder" to comfort him. He did this for Lennie's good. "I ain't takin' it away jus' for meanness". That mouse ain't fresh....you get another mouse that's fresh and I'll let you keep it a while". He promises Lennie to give a pup for Lennie to pet. "First chance I get I'll give you a pup,...That'd be better than mice. And you could pet it harder." He even plans a future with Lennie, "..we're gonna get the jack together and we're gonna have a little house and a couple of acres ...." George is also a short-tempered person, he often gets irritated, weary, frustrated with the difficulties of his responsibility for taking care of Lennie, such as Lennie's forgetfulness. When Lennie forgot where they are heading to, George swears and scolds in anger: "So you forgot that awready, did you? I gotta tell you again, do I? Jesus Christ, you're a crazy bastard!" "The hell with the rabbits. That's all you ever can remember is them rabbits. Of Mice and Men.K. Now you listen...." The way George treat Lennie is just like the way an overtaxed--frustrated parent treats a little boy. Lennie asks for ketchup childishly during the dinner. This innocent request sparkle--sparkles George's frustration again. He "exploded" his voiced "furiously", and "rose nearly to a shout". He launches a long complaining speech about the difficulties that Lennie brought to him; states that without caring for Lennie he can live a far easier life. In anger George declares" If I was alone I could live so easy. I could go get a job an' work, an' no trouble. No mess at all...." On the other hand, despite George's harsh, derogatory responses, Lennie never gets annoyed. Because--because Lennie looks up to George as an idol, he mimics action of George's. ...read more.

It is Lennie and their strong bond that keep them from the terrible isolation that the other men experience, and gives George a special sense of purpose to strive for. Their friendship sustains their dream and makes it possible. However, with a world filled with harsh adversity and predatory--circumstances, their relationship just can't simply sustain. George and Lennie are forced to separate tragically. By killing Lennie, George is also forced to shoot his dream, forced to surrender his faith of the Land of Promise. Without Lennie, George is now in loneness and hopelessness, just the same as anyone among the legion of poor, homeless, powerless migrant workers. The tragedy for them is, no matter how hard they work they are doomed--fated to a life of wandering, no matter how intensely they dream, their dreams can only help transcend their circumstances, but no way to be fulfilled. The faded American dream in the closing chapter sadly shows that a land of freedom, contentment, and safety is not possible to be found in this world, it is only an Eden-like place. Actually, at the end of the opening chapter, when Steinbeck deliberately wrote on the rabbit with different colors which Lennie desired is already a hint of the unrealistic fantasy of George and Lennie. Through the comparison of the opening and ending scenes in Of Mice and Men, we can find that the settings are very important in these two parts, Steinbeck used them to help evoke different feelings and hint about the future troubles, as well as symbolize the main themes. Dialogues between George and Lennie are the main content of these two scenes, they help to characterize the main roles and establish and develop the main themes - loneliness, friendship, and dream. Through these main themes Steinbeck portrayed the hardship that ranch workers like George and Lennie encountered during the heartbreaking Depression era. He has succeeded in describing the cruelty and insurmountable -extremely difficult challenges during the Depression. ...read more.