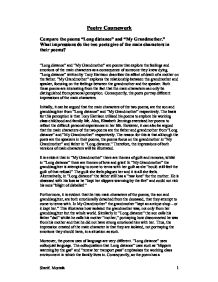 In the same way, in "Long distance" the father could not risk his sons "blight of disbelief," this signifies that the father became absorbed in preserving his wife's memories, unable to move on. In an analytical sense, this illustrates that the main characters both had obsessions that absorbed their lives, perhaps creating sympathy in the reader for them. Also, it appears that the grandmother and father do not need human company, as they attempt to preserve what is dear to them. This paints a desolate image of them to the reader, Furthermore, both the grandmother and father seem to be vulnerable at some point. In "My Grandmother" the grandmother becomes "too frail to keep a shop," this illustrates her susceptibility as she can no longer maintain her beloved possessions. Similarly, in "Long distance" could not risk the son's "blight of disbelief," this illustrates that the father's feelings were vulnerable and he does not want his son to shatter his hopes, ending his grief. Thus, the main characters draw sympathy from the reader due to their vulnerability, also making the reader more susceptible to the deaths in the poems. Additionally, the main characters experience loss in both poems that affect them emotionally. ...read more.

The word "knew" is written in italic and the sentence is almost sarcastic. This portrays the son's disapproval towards the father denial. Similarly, in "My Grandmother" the granddaughter "once refused to go out" with the grandmother and the grandmother's "wish was not to be used like antique objects." This shows that the granddaughter rejected the grandmother, because she disapproved of the way the grandmother treated everything a on a superficial level, like the antiques. The impression created of the son is that he could be inconsiderate towards his father feelings. The impression that is associated with the granddaughter is that she was "afraid," arousing sympathy and consideration in the reader. In conclusion, both poems follow individuals who cannot come to terms with something. In these two cases, it is guilt, in the poem "My Grandmother" and grief in the poem "Long distance." The different versions of main characters both ignite different impressions in the reader. Furthermore, the poems use a variation of different and similar themes to create a certain affect on the reader. Impressions of the main characters such as sympathy and callousness are exposed to the reader. Therefore, the poems can be perceived as a person's movement towards closure and the method in which they handle their suffering, creating different impressions as their struggle progresses. 1 Sharif. Mostafa ...read more.