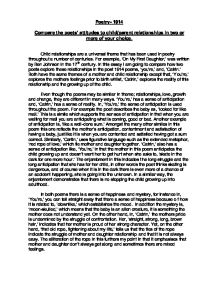 Compare the poets(TM) attitudes to child/parent relationships in two or more of your choice.

Poetry- 1914 Compare the poets' attitudes to child/parent relationships in two or more of your choice. Child relationships are a universal theme that has been used in poetry throughout a number of centuries. For example, 'On My First Daughter,' was written by Ben Johnson in the 17th century. In this essay I am going to compare how two poets explore these relationships in the post 1914 poems, 'you're,' and, 'Catrin.' Both have the same themes of a mother and child relationship except that, 'You're,' explores the mothers feelings prior to birth whilst, 'Catrin,' explores the reality of this relationship and the growing up of the child. Even though the poems may be similar in theme; relationships, love, growth and change, they are different in many ways. 'You're,' has a sense of anticipation and, 'Catrin,' has a sense of reality. In, 'You're,' the sense of anticipation is used throughout the poem. For example the poet describes the baby as, 'looked for like mail.' This is a simile which supports the senses of anticipation in that when you are waiting for mail you are anticipating what is coming, good or bad. Another example of anticipation is, 'like a well-done sum.' ...read more.

In the poem, 'You're,' the mother has nothing like this to worry about yet, because she is talking to the baby in her womb. This sense of safety is emphasised by the simile, 'snug as a bud,' which in addition is a metaphor for life. The structures of the two poems, again, have similarities and differences. 'You're,' has two stanzas with nine lines in each, suggesting the nine months of pregnancy and the reflection of content and theme in the poem. 'Catrin,' has two stanzas also, the first in the past tense, and the second in the present tense. This distinguishes the continuing tie between mother and daughter in the two confrontations. In 'You're,' the sentences are quite short, or force the reader to breathe because of the commas, 'clownlike.' This is created to add to the series of images. On the contrary, in, 'Catrin,' there are long sentences, with a lot of enjambment to maybe indicate a long struggle between the mother and child. For example, 'the people and cars taking turn at the traffic lights,' shows us that the alliteration means that as well as people turning at traffic lights, the mother is at a turning point in her own life, the enjambment re-enforces this. In both poems there is use of alliteration to a great extent. ...read more.

When someone is born, they have, 'a clean slate, with your own face on,' which gives the individual a new identity, beginning and start. 'Snug as a bud,' indicates the change and growth and bud is a metaphor for life. 'Catrin,' on the other hand is about new beginnings, but also about growing up, the child doesn't have its own identity, but in the second confrontation the child begins to become her own individual. Her, 'defiant glare,' indicates her attitude and the fact that she wants to, 'skate in the dark for one more hour,' means that she wants to start her own life, but her mother is becoming too protective of her child. I think that women can relate to both of these poems, and the poets achieve this in different ways. They cover the themes of life, excitement, evolution, new starts, mystery, confrontations; relationships and the struggle that comes with love which many women experience when pregnant. Consequently, 'You're,' relates to the baby being in the womb and the anticipation of the birth, which I think is the most effective theme in this poem. To sum up, 'Catrin,' I would say that to make relationships work you need to work at them and with all kinds of love, there comes difficulties. These poems may seem very similar on the surface, but if you look in more detail, they have many differences. ...read more.