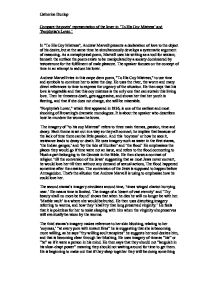 Compare the poets' representation of the lover in 'To His Coy Mistress' and 'Porphyria's Lover.'

Compare the poets' representation of the lover in 'To His Coy Mistress' and 'Porphyria's Lover.' In "To His Coy Mistress", Andrew Marvell presents a declaration of love to the object of his desire, but at the same time he simultaneously develops a systematic argument of reasoning. As a metaphysical poem, Marvell uses his writing as a tool for sexism; beneath the surface the poem exists to be manipulated by a society domineered by testosterone for the fulfilment of male pleasure. The speaker focuses on the concept of time in an attempt to seduce his lover. Andrew Marvell tries in this carpe diem poem, "To His Coy Mistress," to use time and symbols to convince her to seize the day. He uses the river, the worm and many direct references to time to express the urgency of the situation. He then says that his love is vegetable and that this coy mistress is the only one that can sustain this living love. Then he threatens death, gets aggressive, and shows her that her youth is fleeting, and that if she does not change, she will be miserable. "Porphyria's Lover," which first appeared in 1836, is one of the earliest and most shocking of Browning's dramatic monologues. It is about the speaker who describes how he murders the woman he loves. The imagery of "to his coy Mistress" refers to three main themes, passion, time and decay. Each theme is set out in a way so they all connect; he implies that because of the lack of time there can be little passion. ...read more.

And at the end it is all for one thing. He is satirising a genre. "The conversion of the Jews" indicates that he will love her until the end of the world, because at that point no Jew would convert. The second stanza explains how we are not eternal, "times winged chariot hurrying near," the lover explains how we are not eternal and how time is limited. He feels that when she is dead he will never see her again "Thy beauty shall no more be found." The second stanza is basically explaining the simplicity of life and the reality of love. He implies that love lyrics are merely an attempt to woo a woman and that is all they are. He is suggesting that it is a waste of time because death is "hurrying near." The third stanza concludes that life and time are limited, "therefore" they should give into temptation, "tear our pleasures with rough strife." The language has changed from referring to space and time, to addressing them. His conclusion is that they should live fully together. "Thus we cannot make our sun Stand still, yet we will make him run." He is basically making the assumption that she will have given into him and that although they cannot stop the clock from ticking, they will live so time will have to catch up with them because they will be living every second as best they can and not wasting valuable time as she holds on to "that long preserved virginity." ...read more.

In 'Porphyria's Lover' Browning takes on a rather fearful and ominous tone as he portrays a manic, obsessive, psychotic and even murderous lover. The tone in the poem goes from dark and thorough when she is not there, to less dark yet more thorough. When she is dead the poem takes on a completely different tone, it is released and looses all the tension it had before. The speaker in 'Porphiria's Lover' lives in a cottage in the countryside. His lover, a beautiful young woman named Porphyria, comes in out of a storm and proceeds to make a fire. She embraces the speaker, offering him her bare shoulder. This contrasts with 'To His Coy Mistress' where the speaker is getting no attention from the woman. In 'Porphyria's Lover' the speaker desires more sexual intercourse with this woman, he wants to possess her wholly to himself. In 'To His Coy Mistress' the speaker demands sexual intercourse with the woman, this shows an important difference between the two speakers. Both speakers show very macho, masculine motives. The lover in 'To His Coy Mistress' desires to 'devour' this woman, and the lover in 'Porphiria's Lover' He wants to possess her. They each want to dominate the woman, as if she were an object. They show two sides of men, one side that undermines a woman and feels they are superior to the woman and the side, which is very insecure, and the women seem to have power and control over them. 'Phorphyria's lover' especially shows the contrast between the insecurity of a man, who feels and portrays a woman as having more power over him with the satisfaction he feels when he gains control by killing her. ...read more.