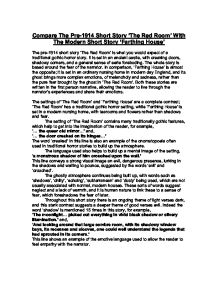 Compare The Pre-1914 Short Story 'The Red Room' With The Modern Short Story 'Farthing House' The pre-1914 short story 'The Red Room' is what you would expect of a traditional gothic horror story. It is set in an ancient castle, with creaking doors, shadowy corners, and a general sense of eerie foreboding. The whole story is based around the fear of the narrator. In comparison, 'Farthing House' is almost the opposite; it is set in an ordinary nursing home in modern day England, and its ghost brings more complex emotions, of melancholy and sadness, rather than the pure fear brought by the ghost in 'The Red Room'. Both these stories are written in the first person narrative, allowing the reader to live through the narrator's experiences and share their emotions. The settings of 'The Red Room' and 'Farthing House' are a complete contrast; 'The Red Room' has a traditional gothic horror setting, while 'Farthing House' is set in a modern nursing home, with tearooms and flowers rather than shadows and fear. The setting of 'The Red Room' contains many traditionally gothic features, which help to get into the imagination of the reader, for example, '... ...read more.

Then, later, the narrator attempts to reassure himself by talking aloud to control his mounting panic, '"By Jove!" said I aloud, "that draught's a strong one!"' and, '"Steady on!" I said... speaking with half-hysterical facetiousness.' Finally, the story ends when the narrator is taken over by complete panic, 'I was now almost frantic with the horror of the coming darkness, and my self-possession deserted me.' 'Farthing House' is also written in the first person narrative, but is in the form of a letter to the narrator's daughter, to be read 'at some future date'. This story starts with a flashback, which stirs the deep hidden memory, which is the story itself, 'I was burning the last of the leaves... and as I caught the smell of it, that most poignant, melancholy, nostalgic of all smells, something that had been drifting on the edge of my conscience blurred... It was as if a door had been opened on to the past.' Throughout the story, the character of the narrator is revealed to the reader through her statements, 'I always loved her, she was such fun. I wish you had known her.' This statement shows the narrator to be a warm, and sensitive person, while this one reveals her guilt, 'And of course, I wish that one of us could have had her.' ...read more.

and, '...the sun... a great red, frost-rimed ball.' and later, 'There was a clear, star-pricked sky.' Near the beginning of the story there is also a one-line paragraph, 'Little Dornford' which suggests a sleepy little village, but with no suggestion of anything ghostly. There are a number of language tools used in both of these stories, such as similes, metaphors, and alliteration, '...a sense of loss, a melancholy. It descended on me like a damp veil about my head and shoulders.' (Simile) '...but I was on edge, and still enveloped in sadness and foreboding.' (Metaphor) 'Poor, pale and distraught young thing.' (Alliteration) After having read both 'The Red Room' and 'Farthing House' and compared them, I can say that I preferred 'Farthing House'. This is because I found it easier to read, as the language is more accessible. I also found the storyline more interesting; I felt it had more depth than that of 'The Red Room', as did the characters. Gothic horror, such as the sort in 'The Red Room' does not appeal to me, because I find it is too predictable. Whereas the modern ghost story 'Farthing House' had an interesting twist at the end, similar to 'Hannibal' by 'Thomas Harris', which I recently read, and which ends in an unusual and unpredictable twist. ...read more.