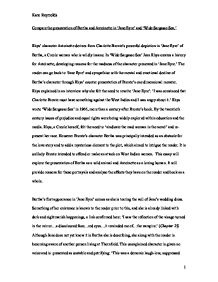 Compare the presentation of Bertha and Antoinette in 'Jane Eyre' and 'Wide Sargasso Sea.'

Compare the presentation of Bertha and Antoinette in 'Jane Eyre' and 'Wide Sargasso Sea.' Rhys' character Antoinette derives from Charlotte Bronte's powerful depiction in 'Jane Eyre' of Bertha, a Creole woman who is wildly insane. In 'Wide Sargasso Sea' Jean Rhys creates a history for Antoinette, developing reasons for the madness of the character presented in 'Jane Eyre.' The reader can go back to 'Jane Eyre' and sympathise with the mental and emotional decline of Bertha's character through Rhys' counter presentation of Bronte's one dimensional monster. Rhys explained in an interview why she felt the need to rewrite 'Jane Eyre': 'I was convinced that Charlotte Bronte must have something against the West Indies and I was angry about it.' Rhys wrote 'Wide Sargasso Sea' in 1966, more than a century after Bronte's book. By the twentieth century issues of prejudice and equal rights were being widely explored within education and the media. Rhys, a Creole herself, felt the need to 'vindicate the mad woman in the novel' and re-present her race. However Bronte's character Bertha was principally intended as an obstacle for the love story and to add a mysterious element to the plot, which aimed to intrigue the reader. It is unlikely Bronte intended to offend or make an attack on West Indian women. This essay will explore the presentation of Bertha as a wild animal and Antoinette as a loving human. ...read more.

Christophine's conversation with Rochester conveys that Rochester managed to make Antoinette think she loved him through convincing her that he was madly in love: 'You make her think you can't see the sun for looking at her.' Rochester's reply to Christophine: 'It was like that...' (Part Two) conveys that he did make Antoinette love him rather than being lured in by a 'witch.' During Christophine's confrontation with Rochester over Antoinette the technique of repetition is used for Rochester's mental reply. This is powerful as it shows how guilty Rochester if feeling. He accepts 'it was like that.' The repetition intensifies the sympathy felt towards Antoinette by the reader as the narrator of this part of the book, a narrator who is Antoinette's antagonist, accepts and reinforces the words of Christophine. Rhys directly rewrites many claims Rochester made to Jane about Bertha. For example he says: 'Bertha Mason is mad, her mother...both a mad women and a drunkard...Bertha copied her parent in both points.'(Chapter 26) These statements are short and forceful, leading the reader to believe in them without question. Rhys responds to the mad image of Bertha by countering the argument that she inherited her mother's illness: 'They tell her she is mad, they act like she is mad...in the end she give up...care for nothing.' (Part Two) Rhys suggests through Christophine that, like her mother, Antoinette was driven to the state she is seen in throughout 'Jane Eyre' by Rochester's ill treatment of her. ...read more.

(Chapter 38), could not have been written without Bertha's death. In 'Wide Sargasso Sea' Rhys naturally develops Antoinette's death, exploring her state of mind and reasons for the fire. The narrative pace increases as Antoinette describes her dream and the reader realises it is a prophetic dream of her final fate. This premonition is an effective device as it enables the reader to understand Antoinette's actions and feelings: 'I saw the grandfather clock...I saw the orchids and the stephanotis...I heard the parrot call...'(Part Three) Rhys rewrote the ending leaving the reader feeling Antoinette did not commit suicide but escaped into the world she loved. '...when I looked over the edge I saw the pool at Coulibri...the sky so red...I jumped and woke' (Part Three). 'Woke' can be interpreted as Antoinette meaning she woke from the nightmare of England. Antoinette's final dream encompasses the symbolism which runs throughout the book, flowers and the colour red symbolise Antoinette's passion and beauty. This contrasts to Jane Eyre, where Bertha is described as having 'a discoloured face'. Rhys' symbolism can be seen as very foreboding when we re-read the book: 'Orchids flourished out of reach or for some reason not to be touched.' (Part One) This could be interpretated as a metaphorical depiction of Antoinette's fate; a beautiful woman condemned to a life of solitude. The colour red is associated with Antoinette, it appears in all her dreams and her favourite dress is also red. ...read more.