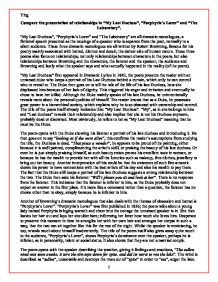 Compare the presentation of relationships in "My Last Duchess", "Porphyria's Lover" and "The Laboratory". "My Last Duchess", "Porphyria's Lover" and "The Laboratory" are all dramatic monologues, a fictional speech presented as the musings of a speaker who is separate from the poet, normally to a silent audience. These three dramatic monologues are all written by Robert Browning, famous for his poetry mainly associated with hatred, distrust and deceit, the darker side of human nature. These three poems also focus on relationships, not only relationships between characters in the poem, but also relationships between Browning and the characters, the listener and the speaker, the audience and Browning and lastly what the speaker says and what actually happened in the reality (of the poem). "My Last Duchess" first appeared in Dramatic Lyrics in 1842, the poem presents the reader with an unnamed duke who keeps a portrait of his Last Duchess behind a curtain, which only he can control who to reveal to. The Duke then goes on to tell the tale of the life of his late Duchess, how she displeased him because of her lack of dignity. This triggered his anger and irritation and eventually he chose to have her killed. Although the Duke mainly speaks of his late Duchess, he unintentionally reveals more about the personal qualities of himself. The reader knows that as a Duke, he possesses great power in a hierarchical society, which explains why he is so obsessed with ownership and control. The title of the poem itself already indicates this: "My Last Duchess". "My", as in she belongs to him and "Last duchess" reveals their relationship and also implies that she is not his Duchess anymore, probably dead or disowned. Most obviously, he refers to her as "My Last Duchess" meaning that he must be the Duke. The poem opens with the Duke showing his listener a portrait of his late duchess and introducing it. ...read more.

The fact that she is more assertive than him, belong to a higher social class than him, makes him feel inferior and weak. In order to regain his confidence he tells himself that she is weak, that she loves him and needs him, "at last I knew Porphyria worshipped me". He then kills her and toys with her corpse to show that at last, he is in charged and the one who controls her. Unlike the Duke in "my last Duchess", the speaker in "Porphyria's lover" lacks the power and status the Duke has, so therefore he carries out the murder himself, "all her hair in one long yellow string I wound three times her little throat around, and strangled her." The fact that he kills her with her own hair is very symbolic, as that was what she used to entice him. The murder is also very shocking because the first few lines of the poem resembles the opening of the love poetry from Renaissance, therefore such violence and murder was definitely not expected by Victorian readers. Murder in "The Laboratory" is completely different from murder in the other two poems, as it is unclear whether the murder would take place or not. However, it is clear that the murder is pre-meditated because the entire poem is about the planning of a murder. Similar to the lover in "Porphyria's lover", the speaker lacks power and authority to remove her rivals openly, therefore she resorts to stealth. She cannot keep nor gain a man's love so she blames it on her rivals. She believes that by killing her rivals, "he" would come back to her, almost as if "he" wants to be with her, but the presence of her rivals stops him from doing so. The stereotype of women during the Victorian period was one of vulnerability and obedience. The fact that a female is plotting a murder in this poem and enjoying the preparation in such a way would have been shocking and unusual for the Victorian audience of the time. ...read more.

However, the second half of the poem, after the murder has taken place, everything seems perfect because they finally "sit together now". Porphyria can no longer move, which leaves the speaker as the person in control, and clearly, he reverses the roles. Her head is placed on his shoulder instead of his head on hers, and he is there toying with her corpse. Perhaps this was what he always wanted, to be the dominant person in the relationship. Browning does not condemn any of the characters; instead he lets the reader decide the speaker's guilt as the story unfolds. The murder in "My last Duchess" reveals the Duke's obsessive need to control his Duchess; he kills her to remove her "heart". It is not clear whether the affair was even true or not, if its not then it indicates the Duke's paranoia and ruthlessness and he chose to have her killed even when nothing was going on. It is not clear whether the murder in "The laboratory" would take place or not, so it is hard for the reader to determine her guilt. To a certain extent she gains the reader's sympathy because she is a victim of unrequited love. But it does make the reader question whether murder is necessary. The speaker in "Porphyria's lover" is less guilty, as his reasons for the murder does gain the reader's sympathy. To conclude, in each of the three poems Browning has presented very strange warped relationships which could hardly be considered as conventionally loving. "My last Duchess" presents an arrogant Duke obsessed with power and control, who loves his late duchess as an object, not as a wife. "Porphyria's lover" presents a man who is insecure in his position as a male, knowing that the relationship would never be accepted by their society, he kills his lover to preserve their love forever. "The Laboratory" presents a jealous and vengeful woman disappointed in love, ready to murder her love rivals. Believing that "he" would come back to her once her rivals are dead. Ying 1 ...read more.