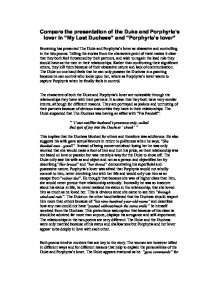 Compare the presentation of the Duke and Porphyria's lover in

Compare the presentation of the Duke and Porphyria's lover in "My Last Duchess" and "Porphyria's lover" Browning has presented The Duke and Porphyria's lover as obsessive and controlling in the two poems. Telling the stories from the characters point of view makes it clear that they both feel threatened by their partners, and wish to regain the lead role they should have as the men in their relationships. Rather than confronting their significant others, they kill them because of their obsessive nature and lack of communication. The Duke on one hand feels that he can only possess the Duchess in a painting because he can control who looks upon her, where as Porphyria's lover wants to capture Porphyria when he finally feels in control. The characters of both the Duke and Porphyria's lover are noticeable through the relationships they have with their partners. It is clear that they both have very similar intents, although for different reasons. They are portrayed as jealous and untrusting of their partners because of obvious insecurities they have in their relationships. The Duke suspected that The Duchess was having an affair with "Fra Pandalf": " 't'was not/Her husband's presence only, called that spot of joy into the Duchess' cheek' " This implies that the Duchess blushed for others and therefore was adulterous. He also suggests his wife gave sexual favours in return to politeness when he says; "She thanked men - good!". ...read more.

The fact that he killed her shows true cold-heartedness and is shocking that he only talks about her death for half a line: "Then all smiles stopped together" This means that she never smiled at anyone again as he had her murdered. It is effective that he talks about her death carelessly because it highlights his ruthlessness. It is also significant that he himself did not kill her, as he does not want to waste time on her because he thinks he is far too important. Porphyria's lover kills her in a spontaneous moment, when he is overcome with love, because he realises that at last he is in control of their relationship. At the beginning of the poem he was waiting for her: "I listened with heart fit to break" but near the end he comments: "I untightened", showing that he is the one who has the power now. The moment he kills her is of meaning, as it is when they are at the height of passion: during or just after lovemaking. This shows how love and death are so closely related. There is evidence of rational lunacy as they "sit together now" after he has killed her and "all night long we have not stirred," suggests he does not plan to leave her soon. This implies that his mind and therefore actions have become controlled by the obsessive love that he feels for her. ...read more.

He is also very humble because he does not expect Porphyria to love him and when he realises "Porphyria worshipped" him, he is surprised. This is due to his low status as the Duke who has a high status has opposing preconceptions of how his relationship with his wife should be. He expects the Duchess to love him and is obviously angry, because of his arrogance, when she doesn't seem to. The descriptions of their homes also display their different classes. The lover lives in a "cottage", which means he is not rich and reminds one of someone of quite low class, and shows he has little in his life accept Porphyria. The Duke has many objects and pieces his art, showing his love for things not people. It also reminds us of the Renaissance setting and shows that his is wealthy. Comparing the two poems shows that Browning has a very pessimistic view of relationships. It seems he feels that relationships without love and admiration can never work and will end in disaster as is apparent from "My Last Duchess". Ironically he also feels that a relationship with love cannot be sustained either, which is evident from "Porphyria's Lover". In "My Last Duchess" she dies because she did not give the Duke the admiration he desired, but when in "Porphyria's lover" Porphyria made her love for her lover clear, he kills her anyway. This perhaps shows the aggressive nature of men and how at the time they were very dominant in society. ...read more.