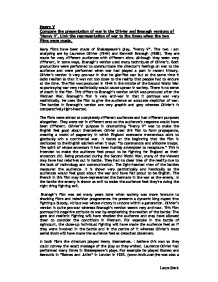 Henry V Compare the presentation of war in the Olivier and Branagh versions of 'Henry V'. Link the representation of war to the times when the two films were made. Many films have been made of Shakespeare's play, "Henry V". The two I am analysing are by Laurence Olivier (1944) and Kenneth Branagh (1988). They are made for very different audiences with different aims. Although they seem very different, in some ways, Branagh's version used many techniques of Olivier's. Both productions were performed to communicate the director's feelings on war to the audience and were performed when war had played a part in recent history. Olivier's version is very pro-war in that he glorifies war but at the same time it lacks realism so that it was not too close to the reality that people had to endure at the time. The film was produced in 1944 in the middle of the Second World War so portraying war very realistically would cause uproar in society. There is no sense of death in the film. This differs to Branagh's version which was produced after the Vietnam War. Branagh's film is very anti-war in that it portrays war very realistically. He uses the film to give the audience an accurate depiction of war. The battles in Branagh's version are very graphic and gory whereas Olivier's is comparatively light-hearted. The films were aimed at completely different audiences and had different purposes altogether. They were set in different eras so the audience's response would have been different. Olivier's' purpose in dramatising "Henry V" was to make the English feel good about themselves. Olivier used this film to form propaganda, creating a world of pageantry in which England overcame tremendous odds to gloriously win a continental war. It states at the beginning that the film is dedicated to the English soldiers when it says: "to commandos and airborne troops. ...read more.

The air is filled with smoke and screams of pain and anger are heard. Explosions and sounds of bombs are going off in the background. It is very realistic. During Henry's speech, he is dirty and bloody. He seems frail and cannot speak very clearly unlike in Olivier's version. The speech is very heroic as Henry increases volume towards the end to psyche his soldiers up. Near the end he begins to shout as explosions go off in the background. They all seem worn out, covered in blood and dirt. The music is fast and solemn sounding. There are dramatic images with sweat, blood and dirt. Not many actors are shown but techniques are used to make us imagine there are more actors standing behind. An effective technique is used when Henry's horse rears on its hind legs as he is silhouetted against the explosions and fire. There are conversations like in Olivier's version but the men are fearful and tired. Their topics of conversation are much more appropriate to the situation than in Olivier's version. Both Branagh's version and Olivier's versions included the battle of Agincourt but in enormously dissimilar ways. Olivier portrayed war very light-heartedly. The previous night is portrayed very similarly to the play. Special lighting is used to highlight only certain parts of the faces of the men. This was experimental use of Technicolor. The lights show Henry's face as a silhouette. This makes it all look more overcast and makes Henry look thoughtful. In the morning's preparations, the set for the French's side is very circus like. They all look joyful and confident. They are more relaxed than a realistic army would appear before battle. It shows all the armour and men looking strong and well protected. It then changed dramatically from the upbeat French preparations to the slow and depressing set of the English. There are no sound effects here. ...read more.

The film was aimed to make the audience proud to be English and entering scenes in which English are being punished for treachery would not put across the right message. The scene in which Bardolph is killed is also omitted in the Oliver version as again the English would not have liked to be called traitors. It's also a very gory and emotional scene which may have had an adverse effect on the audience Branagh includes these scenes to show the realism of society and that not all people can be trusted. It conveys the message not to be too proud to be English as not all English are loyal to the country. The scene in which Bardolph dies would flatter the queen in that it shows that leaders have to stick to orders even if they do not want to. It also shows the emotional side to Henry's nature making us feel we know more about his character. Both films were a product of their times and society giving different ideas of war and leadership. Both productions were performed to communicate the director's feelings on war to the audience and were performed when war had played a part in recent history. Although Branagh used many of Olivier's techniques and ideas, the purpose of the film was very different. Both films turned out to be hits even though Branagh had a restricted budget with few actors and less advanced sets and costumes than Olivier. The differences in the films are understandable bearing in mind the difference in the times. If Branagh's film had been shown to the 1940's society, its accurate depiction of war would have caused uproar. If Olivier's film was shown to the 1980's audience, people would not be shocked by it as it was too light-hearted for that society who had become more used to seeing shocking events on the screen. Both were effective in conveying the desired idea of war relevant to the times of release and the director's view. Both were undoubtedly successful in entertaining their respective audiences. ?? ?? ?? ?? Laura Stark ...read more.