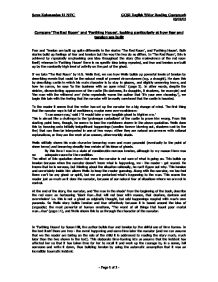 Compare 'The Red Room' and 'Farthing House', looking particularly at how fear and tension are built Fear and Tension are built up quite differently in the stories 'The Red Room', and 'Farthing House'. Both stories build up feelings of fear and tension but the way the two do so differs. In 'The Red Room', this is achieved by repeatedly emphasising one idea throughout the story (the malevolence of the red room itself) whereas in 'Farthing House' there is no specific idea being repeated, and fear and tension are built up by the constantly high level of activity on the part of the ghost. If we take 'The Red Room' by H.G. Wells first, we see how Wells builds up powerful levels of tension by describing events that could be the natural result of present circumstances (e.g. a draught). He does this by describing castle in which his main character is to stay in gloomy, and slightly unnerving terms, and how he comes, he says 'to the business with an open mind.' (page 3). In other words, despite the sinister, discomforting appearance of the castle (its darkness, its draughts, it shadows, for example) ...read more.

In the text itself there are two - the event happening and some time later the narrator (and we can assume that we the reader are taking on the role of the child it is addressed to reading the story much, much later than the two shown in the text). This elaborate time-framing lets us assume that the incident has affected her so that it has taken time for her to recall it and work up the courage to, in a sense, tell someone and write it down, thus building tension by using the automatic assumption that it was an incredibly traumatic incident. I began to be restless several weeks ago. I was burning the last of the leaves... and I let myself go back...watched it unfold again, remembered. So that it was all clear in my mind...a week later.(pages 16 and 17) This quotation shows that the author is using time-framing in the story. The time reference 'several weeks ago' doesn't refer to when the incident occurred, but to when she last thought of 'that day'. A difference between this story and the former is that, whereas the opposite is true for the short story by H.G. ...read more.

The address of the woman in question was in Farthing House Close. This twist is there to make the reader tense by implying that, although never seen any more, the ghost of Eliza Maria Dolly is still very much active (the word is really 'alive', but ghosts can't really be alive, so I used 'active' instead). I have no doubt that the narrator thought that Eliza's ghost was responsible, as the woman claimed she wasn't of her own mind when the theft happened. I, although I cannot provide a suitable alternative explanation, am sceptical. In closing, I think that both writers tried similar devices but in different ways. An example is repetition. H.G. Wells uses it to emphasise the malevolence of what haunts the red room, and how it drives the narrator almost completely paranoid. Susan Hill, however, uses repetition to keep the reader asking himself just what the ghost is. However there are more major differences, for example, the open ending of 'The Red Room', although more conventional, is far more cryptic, and dramatic, and not so neat as the also open ending to 'Farthing House'. Seren Kuhanandan 11 N/FC GCSE English Wider Reading Coursework 05/02/02 - Page 1 of 2 - ...read more.