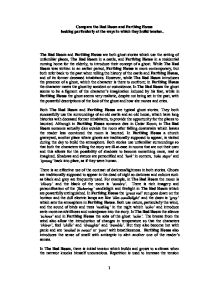 Compare the Red Room and Farthing House looking particularly at the ways in which they build tension.

The young man examines ever corner of the room closely as it is unfamiliar but still finds 'the remoter darkness of the place ... too stimulating for the imagination' and, 'by this time I was in a state of considerable nervous tension'. Later after the candles are suddenly extinguished he cries with terror 'and dashed at the alcove' in desperation and was 'almost frantic with horror of the coming darkness' and 'leapt panting and dishevelled from candle to candle', which demonstrated how afraid he was of the darkness as it was letting his imagination run wild. We as readers, are almost relieved when he hits his head and become unconsciousness abruptly because he is at last free of his fear of the dark or his perception of the existence of a ghost. In Farthing House the tension is not built up to a crescendo, but builds and falls intermittently. There is a tenseness of the unknown of the location 'as the road narrowed to a single track, between trees, I began to feel nervous....It was very quiet, very out of the way'. There is also an evocative antiseptic smell. However, the tension falls away immediately once inside the house she is warmly greeted by a friendly matron. ...read more.

She does not like staying in hotel rooms and is apprehensive about the presence in Cedar Room. Nevertheless, instead of stabbing frantically at the shadows on the wall and re-lighting extinguished candles to reassure herself like the other character in The Red Room, she finds the confidence to go and follow the unhappy ghost to see if she can be of assistance in finding her lost baby. The character convinces us, too, that there is a real ghost and it is not just psychological or in her dreams by vividly describing a woman in old-fashioned clothes from the past. Both stories were well written and even if there was not a real ghost in The Red Room, we as readers feel as tense as the character in the story, and in Farthing House despite being set in modern times it was realistic that there was actually a ghost. In The Red Room it was pleasing that the elderly people came to rescue the young man after he injured himself even though they did not welcome his over-confident attitude at the beginning. In Farthing House it was comforting that the main character was able to also rescue the unhappy ghost and the story ended happily, despite the death of a much-loved aunt. 1 ...read more.