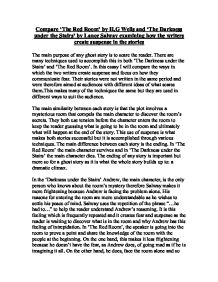 Compare 'The Red Room' by H.G Wells and 'The Darkness under the Stairs' by Lance Salway examining how the writers create suspense in the stories.

Compare 'The Red Room' by H.G Wells and 'The Darkness under the Stairs' by Lance Salway examining how the writers create suspense in the stories The main purpose of any ghost story is to scare the reader. There are many techniques used to accomplish this in both 'The Darkness under the Stairs' and 'The Red Room'. In this essay I will compare the ways in which the two writers create suspense and focus on how they communicate fear. Their stories were not written in the same period and were therefore aimed at audiences with different ideas of what scares them.This makes many of the techniques the same but they are used in different ways to suit the audience. The main similarity between each story is that the plot involves a mysterious room that compels the main character to discover the room's secrets. They both use tension before the character enters the room to keep the reader guessing what is going to be in the room and ultimately what will happen at the end of the story. This use of suspense is what makes both stories successful but it is accomplished through various techniques. The main difference between each story is the ending. In 'The Red Room' the main character survives and in 'The Darkness under the Stairs' the main character dies. The ending of any story is important but more so for a ghost story as it is what the whole story builds up to: a dramatic climax. In the 'Darkness under the Stairs' Andrew, the main character, is the only person who knows about the room's mystery therefore Salway makes it more frightening because Andrew is facing the problem alone. His reasons for entering the room are more understandable as he wishes to settle his peace of mind. Salway uses the repetition of the phrase "...he had to..." to help the reader understand Andrew's reasoning. ...read more.

At the beginning we don't know very much about the story or the plot so there is little uncertainty. More tension is created when the candles are being blown out because it is a mystery which hooks the reader to discover why it is happening. Another way in which structure is used in both stories is the 'person' it is written in. "The Darkness under the Stairs" is written in 'third person' and "The Red Room" in the 'first person'. This is one of the main differences of the two stories because it creates a dissimilar effect on the reader. 'The Red Room' is more personal and subjective because is the actual account from the person who experienced the red room. This also makes it more believable and realistic to the reader as if it is coming straight from the word of the eyewitness. Although "The Darkness under the Stairs" is written in third person, it still creates tension in the line as it can describe the order of events and thoughts of other characters more easily. However, it is more objective and, in my opinion, less effective because it is not as direct to the reader. Another main difference between the two stories is the way they end. For any ghost story, the ending is crucial. It is the climax that the whole story works up to. A twist at the end is often used to make the story less predictable and so add more interest and shock the reader. The ending of the story is the last thing that effects the reader's opinion of the story and so can influence greatly the success of it. At the end of "The Darkness under the Stairs" all the clues given throughout the story fall in to place and the suspense ends with a chilling climax. Andrew gets locked into the cupboard and realizes his fate is unchangeable and he will die alone, trapped with no one knowing he is there. ...read more.

and "...the man with the shade..." This adds mystery to the characters and consequently the atmosphere increases in tension because we want to know more about these characters. In "The Darkness under the Stairs," the characters are described as being normal. There is the Sharmen family who live next door and Andrew's family. Both are described without mystery accept for Andrew, the main character and the main creator of the suspense. Also, Danny Sharmen is the son of the Sharmen family and is described as having "...eyes as cold as stone." Danny is a character used by Salway as a red herring; to keep the reader guessing and wondering if he will have any thing to do with the out come of the story and so again adds suspense. There are many factors in each story, which effect the suspense and tension. Both Wells and Salway use techniques to try and create the most effective level of excitement to suit their story and their audience. "The Darkness under the Stairs" seems more original because it is written in a time when many ghost stories and horror movies have been made so it has to be different from things done in the past in order to captivate the reader and it does this very well. The book is full of intriguing twists which the reader finds facinating.When "The Red Room" was written it wasn't as important to be non-stereotypical because society didn't have as much experience of horror as they do now. In fact some statements written in "The Red Room" seem cliched and slightly humorous to us today only because our ideas of what scares us haves been influenced by more dynamic forms of communication such as film and television. Understandably, times and social ideas have changed since "The Red Room" and so the techniques chosen by Wells don't have as great an impact on us as they would have had on a audience of his time. Both stories create emotion inside the reader and therefore have used suspense very successfully. Rachael Little ...read more.