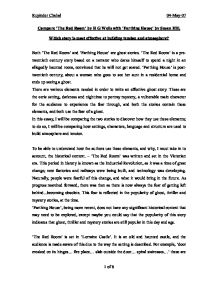 Compare 'The Red Room' by H G Wells with 'Farthing House' by Susan Hill - Which story is most effective at building tension and atmosphere?

Compare 'The Red Room' by H G Wells with 'Farthing House' by Susan Hill. Which story is most effective at building tension and atmosphere? Both 'The Red Room' and 'Farthing House' are ghost stories. 'The Red Room' is a pre-twentieth century story based on a narrator who dares himself to spend a night in an allegedly haunted room, convinced that he will not get scared. 'Farthing House' is post-twentieth century, about a woman who goes to see her aunt in a residential home and ends up seeing a ghost. There are various elements needed in order to write an effective ghost story. These are the eerie setting, darkness and nighttime to portray mystery, a vulnerable main character for the audience to experience the fear through, and both the stories contain these elements, and both use the fear of a ghost. In this essay, I will be comparing the two stories to discover how they use these elements; to do so, I will be comparing how settings, characters, language and structure are used to build atmosphere and tension. To be able to understand how the authors use these elements, and why, I must take in to account, the historical context. - 'The Red Room' was written and set in the Victorian era. This period in history is known as the Industrial Revolution, as it was a time of great change; new factories and railways were being built, and technology was developing. Naturally, people were fearful of this change, and what it would bring in the future. As progress marched forward, there was then as there is now always the fear of getting left behind...becoming obsolete. This fear is reflected in the popularity of ghost, thriller and mystery stories, at the time. 'Farthing House', being more recent, does not have any significant historical context that may need to be explored, except maybe you could say that the popularity of this story indicates that ghost, thriller and mystery stories are still popular in this day and age. ...read more.

This concept is substantiated throughout the story. 'The previous night, I had the sensation of someone having just been in my room. Now I saw her.' So her feelings were correct, making the audience sense tension due to the character's instincts and emotions. Towards the end of the story, she 'was not afraid anymore'. Though she still felt the 'terrible sadness and distress,' she now thought '[the ghost] could do no one harm' as she was only 'in search of her baby.' So, her dominant feeling is not fear anymore, instead, it is a sort of guilt because the ghost is distressed and helpless. 'Mrs Flower' says at the beginning of the story, 'I just wanted to have my conscience cleared so I could bowl off home... with a blithe heart, untroubled by guilt...' Though, she 'felt sorry' for the ghost, and sad for her, in the end. The two main characters are similar in that they are both curious about the existence of a ghost. In 'The Red Room', he visits and searches; in 'Farthing House', she follows the ghost. Even thought they are curious, they are still fearful, until they can draw a logical conclusion or have a realisation of the truth. Then they feel it is not their job to question or to fear. This reflects the fear of mystery and the unknown. The two main characters are different in ways because, in 'The Red Room', the narrator is very confident and lectures others, whereas 'Mrs Flower' is curious, so she learns by asking, for instance, when she asks 'Aunt Addy' about the history of the House. The minor characters also add tension. For instance, in 'The Red Room', there are three other characters, these are the Old People. They are constantly forewarning the main character, 'it's your own choosing'. This creates an ominous atmosphere, as if something fatal is guaranteed to happen and so they will be taking no responsibility for the consequences of the main character's actions. ...read more.

The second is the next night, when she actually sees the ghost. It is within reason to say there is a third climax, which is when she is at the graveyard, but in my opinion, this is more of a conclusion. - This notion is similar to 'The Red Room' in that her understanding is the conclusion, and her fear leaves her. There are smaller climaxes, more to say, points in tension, for instance, when 'Mrs Pearson' talks to 'Mrs Flower' about her stay so far, and when she questions 'Aunt Addy' about the history of the House. It is as if there is a pattern to the building up of tension. - Her second talk with the matron is tenser than the first, and her second night in 'Cedar Room' is tenser than the first. The structure of this story is more complex than the structure of 'The Red Room', sort of more spontaneous, unexpected and twisted. - There is a twist at the end of the story; there is a twisted and unexpected final conclusion. Perhaps this shows, linking structure to language, that we cannot rely on senses, or even daylight, as we cannot make certain what can and cannot happen. In conclusion, I feel 'The Red Room' is more effective in building tension, because it mounts and mounts to one climax, whereas 'Farthing House' builds up your tension, then breaks it down again. I feel they are both effective in creating and building atmosphere, in their own ways. 'The Red Room' is exploring the unknown; similar to what people were facing at the time at which it was written. I feel 'Farthing House' is more of a mimic, being a more modern story. - Though you could argue, being more modern, it is reflecting the fear of the people of the new age; fear of the past, and what we have left behind. Especially as at the end of the story, the House is knocked down and being built over again. Rupinder Chahal 04-May-07 1 of 8 ...read more.