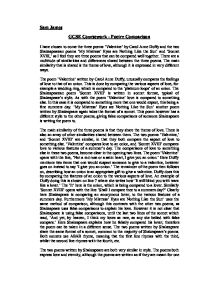 Compare the three poems 'Valentine' by Carol Anne Duffy and the two Shakespearean poems 'My Mistress' Eyes are Nothing Like the Sun' and 'Sonnet XVIII'.

Sam James GCSE Coursework - Poetry Comparison I have chosen to come the three poems 'Valentine' by Carol Anne Duffy and the two Shakespearean poems 'My Mistress' Eyes are Nothing Like the Sun' and 'Sonnet XVIII,' as I feel they are three poems that can be compared well together. There are a multitude of similarities and differences shared between the three poems. The main similarity that is shared is the theme of love, although it is expressed in very different ways. The poem 'Valentine' written by Carol Anne Duffy, unusually compares the feelings of love to that of an onion. This is done by comparing the various aspects of love, for example a wedding ring, which is compared to the 'platinum loops' of an onion. The Shakespearean poem 'Sonnet XVIII' is written in sonnet format, typical of Shakespeare's style. As with the poem 'Valentine' love is compared to something else. In this case it is compared to something more that one would expect, this being a fine summers day. ...read more.

Clearly here Shakespeare is comparing an anonymous lover, to the various features of a summers day. Furthermore 'My Mistress' Eyes are Nothing Like the Sun' uses the same method of comparison, although this contrasts with the other two poems, as Shakespeare uses false comparisons to explain his love. However it is not clear that Shakespeare is using false comparisons, until the last two lines of the sonnet which read, 'And yet, by heaven, I think my loves as rare, as any she belied with false compare.' Here Shakespeare explains how he falsely compared his lover; therefore the poem can be taken in a different sense. The two poems written by Shakespeare share the same format of a sonnet, common to the majority of Shakespeare's poems. Both sonnets use ABAB rhyme, meaning that the first line rhymes with the third, whilst the second line rhymes with the fourth, etc. The two poems written by Shakespeare are both very similar in style. ...read more.

The two Shakespeare poems share a similar layout being the sonnet format traditional to Shakespeare's poems. However 'Valentine' has a very different format. It comprises of five main verses and three lines which stand on their own. These lines are left on their own, to make the reader think about what has been said. The first of the three lines being 'Not a red rose or a satin heart,' which is the opening sentence. Here Duffy makes it obvious that the Valentine present she is giving, is not what one would expect being traditional to something given on Valentines day. The following two secluded lines come one after the other, these two read 'I am trying to be truthful.... Not a cute card or a kissogram.' Similar to the other secluded line, they compare the commercialised side of Valentines day, to something more genuine and thoughtful. In conclusion it is clear to say that there are a number of similarities and differences shared between these three poems. The main similarity being the topic of love which is clear throughout the poems. The differences range through the poems in the style, format and language that they consist of. ...read more.