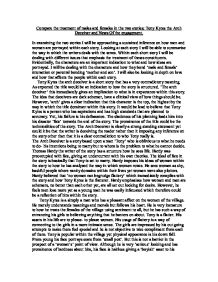 Compare the treatment of males and females in the two stories; Tony Kytes the Arch Deceiver and News Of the engagement.

Compare the treatment of males and females in the two stories; Tony Kytes the Arch Deceiver and News Of the engagement. In examining the two stories I will be approaching a sustained inference on how men and women are portrayed within each story. Looking at each story I will be able to summarise the way in which the writers deals with the sexes. Within each short story I will be dealing with different issues that emphasis the treatment of theses constituents. Evidentially, the characters are an important indication to what and how ideas are portrayed. I will be dealing with the characters and how they bond 'male and female' interaction or parental bonding 'mother and son'. I will also be looking in depth on love and how that affects the people within each story. Tony Kytes the arch deceiver is a short story that has a very contradictory meaning. As expected the title would be an indication to how the story is structured. 'The arch deceiver' this immediately gives an implication to what is in expectance within this story. The idea that deceivers are dark schemer, have a clinical view of how things should be. However, 'arch' gives a clear indication that this character is the top, the highest by the way in which the title dominant within this story. It would be lead to believe that Tony Kytes is a person who has aspirations and has high standards that are planned to accuracy. Yet, his failure is his defeasance. The slackness of his planning leads him into his disaster 'fate' towards the end of the story. The prominence of the title could be the technicalities of the story. The Arch Deceiver is clearly a strong standing statement yet could it be that the writer is deceiving the reader rather than it imposing any inference on the story other than that it is a clear contradiction to who Tony really is. ...read more.

He knows that she cares enormously for him and he takes advantage of this. He is not selfish but though-less. He believes that his mother has no life and she would be upset by the news of his engagement- maybe he thinks she has no life. Yet, the twist of the story is cleverly structured as the mother also conveying a relationship and has the same apprehensions of what the son is to encounter by the news. Neither understands each other on this level of intimacy as it seems as if they both feel so dependant of each other. It would seem that they are both under stating each other and maybe being selfish towards their needs as people. Toward the end of the story the son realises the change and matures to the idea giving a softened edge to the story leaving with the moral of love being no conquer for age. The title 'News of engagement' is the structure of the story. Early within the story to the perception of the reader it would seem that Philip the son was to give the news to his mother however his reluctance is high. Yet, the title becomes the 'twist within the tale'- his mother' news of her relationship with Mr. Nixon. Bennett cleverly gives a realistic view of the story as things are not what they seem. The introduction of the story states that Philips was to arrive at the station only to find his mother not waiting at his arrival. This is insignificant to the element of the story however, it simples outlines a base for the reader. The statement clearly shows that the relationship between the two is important. Their relationship is very close although they don't live together letter were sent between each other 'every week'. He and his mother have sediments of closeness about them and they share everything together. ...read more.

To the reader it could also propose a man with no respect a person who has no consideration for him or his actions. The formalities of the story are fictional. As if it could be a television programme in the genre of light comedy. The story on a whole seems very over rated by Tony's antics and the humour given in several areas could give the implication of a dramatised performance. For instance the imagery of the three girls tumbling out of the cart and then quarrelling and fighting between them would give a great sense of humour to the audience. It would seem if the story was formed to a production of a play or film. Tony would be ironic and most likely sarcastic, we see his character seems quite simple yet we could imagine his facial expressions. News of the engagement is much more realistic. It would seem as if it was a real life situation and could be approachable to everyone in whatever form of situation. The idea of two people who are close together in many forms yet cannot share problems 'new change' as they believe they are so dependant of each other. The story seems more affable to connect with it is not intimidating by the ideas, meanings and morals. The story gives a sense of harmony an essence of love and warmth. The audience could appeal to a wide range of people. The ideas of mother and son relationship could indeed grip the attention of woman and maybe learn from this whereas it could apply to children or people of a developing age. The hidden meanings within the story seem to leap out at the reader and the jaw- dropping change in the story gives that sense of excitement in the reader. 'We live and learn' is an excellent finish with leaves the reader with something to walk away with. Like a pearl that they can roll between the fingers something that they can look at from different angles and see the beauty from each way. ...read more.