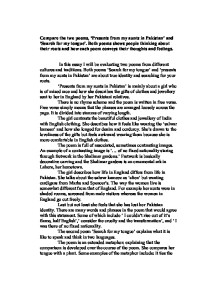 Compare the two poems, 'Presents from my aunts in Pakistan' and 'Search for my tongue' - Both poems shows people thinking about their roots and how each poem conveys their thoughts and feelings.

Compare the two poems, 'Presents from my aunts in Pakistan' and 'Search for my tongue'. Both poems shows people thinking about their roots and how each poem conveys their thoughts and feelings. In this essay I will be evaluating two poems from different cultures and traditions. Both poems 'Search for my tongue' and 'presents from my aunts in Pakistan' are about true identity and searching for your roots. 'Presents from my aunts in Pakistan' is mainly about a girl who is of mixed race and how she describes the gifts of clothes and jewellery sent to her in England by her Pakistani relatives. There is no rhyme scheme and the poem is written in free verse. Free verse simply means that the phrases are arranged loosely across the page. It is divided into stanzas of varying length. The girl contrasts the beautiful clothes and jewellery of India with English clothing. She describes how it feels like wearing the 'salwar kameez' and how she longed for denim and corduroy. ...read more.

The metaphor is very effective because it brings out the point more clearly; it makes the readers envision what the poet it thinking. She explains her ideas in Gujarat. She then translates her thoughts in English showing that although her mother tongue dies during the day, it grows in her dreams at night becoming stronger and producing blossoms. She also wonders whether she will lose the language she began with. Since she is in a foreign country, she doesn't get to speak Gujarati as often as she would like. By the end of the poem, the girl is confident that it will always be part of her identity. After reading the two poems, I have gained an understanding that although they are very different, the two poems are very closely linked. Among the similarities, they are both involved in the same aspect, cultures and traditions and searching for true identity. I have developed interpretation of texts from both poems. ...read more.

language takes over. The final image in the poem, 'Presents from my aunts in Pakistan', tends to carry a particular significance - it's the one image our imagination is left with. The speaker imagines herself there in Lahore - somewhere she has been only in her thoughts. However she is of no fixed nationality. This sounds a slightly threatening phrase. After thoroughly reading the poems, I have arrived at two main conclusions. Firstly it is important to know where one comes from, which is perhaps what the girl in the poem was lacking as a child and it is also important to know what has gone into one's making, even quite far back, I think it gives you a sense perhaps of richness. Secondly it is sometimes very difficult knowing two languages but having to neglect the one that belongs to you. One's mother tongue is an important link to your family and your childhood. Last but not least I agree deeply with the statement and I quote ' that's the deepest layer of my identity' which was said by Sujati Bhatt, the writer. ...read more.