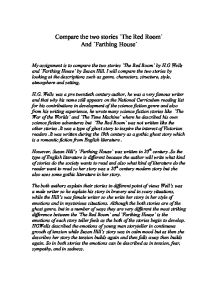 Compare the two stories `The Red Room` And `Farthing House` My assignment is to compare the two stories `The Red Room` by H.G Wells and `Farthing House` by Susan Hill. I will compare the two stories by looking at the descriptions such as genre, characters, structure, style, atmosphere and setting. H.G. Wells was a pre twentieth century author, he was a very famous writer and that why his name still appears on the National Curriculum reading list for his contributions in development of the science fiction genre and also from his writing experience, he wrote many science fiction stories like `The War of the Worlds` and `The Time Machine` where he described his own science fiction adventures but `The Red Room` was not written like the other stories .It was a type of ghost story to inspire the interest of Victorian readers .It was written during the 19th century as a gothic ghost story which is a romantic fiction from English literature . However, Susan Hill's `Farthing House` was written in 20th century .So the type of English literature is different because the author will write what kind of stories do the society wants to read and also what kind of literature do the reader want to read so her story was a 20th century modern story but she also uses some gothic literature in her story. ...read more.

"It is true, and for that very reason you must not hear it just now. You will be prey to enough anxieties and fancies without my adding ghosts to them, the time before the birth of child" While in `Farthing House` the emotions of the female storyteller in the beginning of the story can be described as in calm mood. "If I said a little louder, if you will show me to this haunted room of yours, I will relieve you from task of entering me" As the story progresses the young man is quite sure that he will show the old custodian's that he was spending the night in that haunted room. "I am sure of that .Now it has all come back to me, I do not want to let it to go again, I must set it down " This immediately makes the reader think that the lady is very start and she wants to get the very sad moment in her life By the time young man's boastful character begins to break down as the story progresses. At the same time, the language of the story changes and the level of tension increase and the story then start to be more exciting. "My candle was a little tongue of light vastness, that failed to pierce the opposite end of the room" "By this time I was in a state of considerable nervous tension" While ...read more.

deformities, "It is your own choosing, said the man with the withered arm" "As a second old man entered, more bent more wrinkled, more aged even than the first " "This night for all nights, said the old women" Where in `farthing house` the characters were described from their names not like the characters in `The Red Room`. The characters in `Farthing House` were given the names, Mrs. Flower Aunt Addy Janet Pearson The settings of both of the stories were placed in old gothic houses. `The Red Room` setting was in an old folks home where the old custodians who believed that there was a ghost in the room. While in `Farthing House` the house was used as a small hospital for the troops in World War 2,but before the war it was used as a home for young women who had illegitimate babies. Although both stories were enjoyable and exciting but I enjoyed `The Red Room` more because it was very exciting ghost story to inspire the reader. The author used lots of techniques to make it a successful ghost story. From the start to the end of the story, its was written in a very superstitious manner. So that reader should not be bored and reader may think that what might happen next. This makes more suspense, which I think is the best way of attracting the reader imagination that H.G Wells focused very much. ...read more.