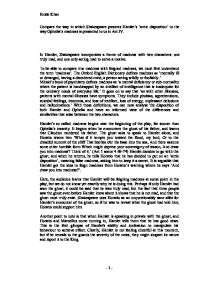 Compare the way in which Shakespeare presents Hamlet's 'antic disposition' to the way Ophelia's madness is presented to us in Act IV.

Compare the way in which Shakespeare presents Hamlet's 'antic disposition' to the way Ophelia's madness is presented to us in Act IV. In Hamlet, Shakespeare incorporates a theme of madness with two characters: one truly mad, and one only acting mad to serve a motive. To be able to compare true madness with feigned madness, we must first understand the term 'madness'. The Oxford English Dictionary defines madness as 'mentally ill or deranged, having a disordered mind, a person acting wildly or foolishly.' Minski's book of psychiatry defines madness as 'a mental deficiency or sub-normality where the patient is handicapped by an intellect of intelligence that is inadequate for the ordinary needs of everyday life.' It goes on to say that 'as with other illnesses, patients with mental illnesses have symptoms. They include phobias, apprehensions, suicidal feelings, insomnia, and loss of intellect, loss of energy, unpleasant delusions and hallucinations.' With these definitions, we can now analyse the disposition of both Hamlet and Ophelia and have an informed view of the differences and similarities that arise between the two characters. Hamlet's so called madness begins near the beginning of the play, far sooner than Ophelia's insanity. ...read more.

This shows the audience that Hamlet is in a very clear state of mind, because to formulate such a cunning and intricate plan, one must be quick-witted and very sharp. Even after the King's guilt is proven with Horatio as witness, Hamlet again reflects and uses his better judgement in the soliloquy at the end of Act 3 scene 2, before seeing his mother. He recognizes his passionate feelings, but tells himself to "speak daggers to her, but use none," as the ghost instructed. Again, when in the King's chamber, Hamlet could perform the murder, but decides not to in his better judgement to ensure that he does not go to heaven by dying while praying. Even in his clearly poignant situation, Hamlet is cool and calculated, thinking through every step before taking it. As Hamlet tells Guildenstern in Act 2 scene 2 "I am but mad north-north-west: when the wind is southerly I know a hawk from a handsaw." This statement reveals out-right Hamlet's intent to fool people with his odd behaviour. This is after Polonius' comment earlier in the same scene, "though this be madness, yet there is method in't." ...read more.

no indication that Ophelia is not truly mad, so the audience are left to conclude that she has lost her mind, and Hamlet has managed to retain his sanity. However, there are some similarities in the way both Hamlet and Ophelia are presented by Shakespeare. For example, both of them speak incoherently in the presence of the King and queen, and they both want to die at some point. Hamlet wishes he were dead in his soliloquy in Act 1 Scene 2, and Ophelia fulfils her own wish and commits suicide in Act 4 Scene 7. Having analysed the way in which Shakespeare presents Hamlets antic disposition and Ophelia's madness, I have been able to reveal some similarities and differences in the presentation. In my opinion, there is a very clear contrast between Hamlet and Ophelia. I have acquired this judgment due to the fact that Hamlet had a reason to feign madness, whereas Ophelia had no reason to be mad in craft, so her insanity was genuine and born involuntarily, while Hamlet intentionally manifested his false lunacy. This contrast allows the audience to have a better understanding of the fact that Hamlet is not really mad, but Ophelia is. Emile Khan - 1 - ...read more.