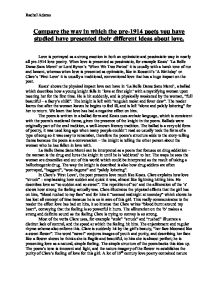 Compare the way in which the pre-1914 poets you have studied have presented their different ideas about love.

Compare the way in which the pre-1914 poets you have studied have presented their different ideas about love. Love is portrayed as a strong emotion in both an optimistic and pessimistic way in nearly all pre-1914 love poetry. When love is presented as pessimistic, for example Keats' 'La Belle Dame Sans Merci' or Lord Byron's 'When We Two Parted' it is usually with a harsh tone of rue and lament, whereas when love is presented as optimistic, like in Rossetti's 'A Birthday' or Clare's 'First Love' it is usually a traditional, conventional love that has a huge impact on the poet. Keats' shows the physical impact love can have in 'La Belle Dame Sans Merci', a ballad which describes how a young knight falls in 'love at first sight' with a mystifying woman upon meeting her for the first time. He is hit suddenly, and is physically weakened by the woman, "full beautiful - a faery's child". The knight is left with "anguish moist and fever dew". The reader learns that after the woman leaves he begins to feel ill, and is left "alone and palely loitering" for her to return. We learn that love has had a negative effect on him. The poem is written in a ballad form and Keats uses archaic language, which is consistent with the poem's medieval theme, given the presence of the knight in the poem. ...read more.

The first three stanzas have an angry tone, and are written almost like a persuasive argument. Rossetti's anger is emphasized by her use of exclamation marks, for example when she writes "I am no doll to dress and sit for feeble worship, if that be what you ask, fool, I refuse you!" The last stanza of the poem rejects the Victorian views of the time, she describes how she wishes for equal and mutual love in her relationship which shows that she holds her relationships in high regard and they are not superficial. This is in contrast with poems like 'First Love' which show a much more traditional view on love, and portray women as fragile and delicate creatures that should be worshipped. Walsh focuses on the kind of relationship she is looking for by using imagery like "hand holding hand", this imagery paints a picture of harmony between the two people and reciprocated love. The alliteration on the 'h' also emphasizes this. Walsh also writes, "We may know the purity and height, of passion" to illustrate the love between the two people and the synchronization of both man and woman. The poem itself could be Walsh addressing her partner, telling him what she wants and doesn't want from their relationship, or it could be Walsh herself, speaking out to men on behalf of all the women of her time, telling men how relationships should be and how women should be treated. ...read more.

It also shows that although they were lovers, he feels he doesn't know her anymore and doesn't know how to greet the woman because what he has found out about her has changed his feelings so much. To conclude, I think that the poets' portrayal of love is varied depending on what stage love is at for the poet, for example in Byron's 'When We Two Parted' which is full of lament and bitterness because he has found out his previous lover has moved on and has gained a bad reputation in doing so. The poem reflects his feelings because the tone is one of resentment. In complete contrast to this is Clare's 'First Love' in which describes the beginnings of love as exciting and mystifying, but a happy experience, full of innocence, purity and virtuousness. A lot of pre-1914 poets seem to have almost the same opinion on one principle of love, illustrated in 'A Woman to Her Lover', whereby a couple have mutual respect and love for each other and the partnership has a "co-equal love". When this is put into practice, happiness is usually seen to be the outcome, as in 'A Birthday'. However, when love goes wrong, i.e. there is no mutual respect and admiration, or the love isn't reciprocated, the result is usually depressing or pessimistic, like in 'La Belle Dame Sans Merci' or 'My Last Duchess'. In my opinion, most poets' views on love are characteristic of the conventional optimistic and romantic view, which however is sometimes unrealistic. ?? ?? ?? ?? Rachel Adams ...read more.