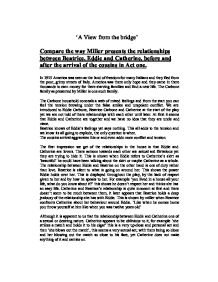 Compare the way Miller presents the relationships between Beatrice, Eddie and Catherine, before and after the arrival of the cousins in Act one.

'A View from the bridge' Compare the way Miller presents the relationships between Beatrice, Eddie and Catherine, before and after the arrival of the cousins in Act one. In 1915 America was seen as the land of freedom for many Italians and they fled from the poor, grimy streets of Italy. America was there only hope and they came in there thousands to earn money for there starving families and find a new life. The Carbone family as presented by Miller is one such family. The Carbone household conceals a web of mixed feelings and from the start you can feel the tension brewing under the false smiles and unspoken conflict. We are introduced to Eddie Carbone, Beatrice Carbone and Catherine at the start of the play yet we are not told of there relationships with each other until later. At first it seems that Eddie and Catherine are together and we have no idea that they are uncle and niece. Beatrice knows of Eddie's feelings yet says nothing. This all adds to the tension and we know its all going to explode, the only question is when. The cousins arrival aggravates this or and even adds more conflict and tension. The first impression we get of the relationships in the house is that Eddie and Catherine are lovers. There actions towards each other are sexual and flirtatious yet they are trying to hide it. ...read more.

For example when she is mad 'she gets up, clearing the dishes' this shows that she doesn't want to confront Eddie therefore she occupies herself with other tasks. Beatrice is also jealous of Catherine; she wants the same relationship that Catherine has with Eddie. Eddie holds the power in the house, with him being the only man. Both women look up to him and never contradict him. Miller clearly shows this throughout the start of Act 1. An example of Eddie's power is when it says 'Eddie is standing facing the two seated woman' this shows the women look up to him and it also forms a triangle with him being the top point, showing his power over them. This can also be seen as though both women are competing for Eddie. The arrival of the cousins marks a vital part in the play because now there are two more men in the house, creating a struggle over power and also competition for Catherine. The cousin's presence affects every relationship in the house and adds to the tension that has built up so far. Eddie's relationship with Catherine is most affected as Catherine no longer looks for Eddie's approval once the cousins arrive. Instead her sights are now set on Rodolpho. There are examples of this throughout the Act with stage directions such as 'wondrously' and 'enthralled' this shows that she likes Rodolpho and for once she is not looking for Eddie's approval. ...read more.

Alferi's role is one of a narrator as well as a conscious; he speaks what is on the characters mind and what they are feeling. For example when Eddie first enters his office he tells us of Eddie's feelings ' I saw it was only a passion that had moved into his body' this adds to the audiences understanding of Millers intentions for the Characters. The relationships throughout the play change quite dramatically with Catherine being attracted to Rodolpho from the moment he enters and we see Eddie's lose of power from the very start. Yet we see the biggest change at the very end of the play when Eddie lays in the street dying, he calls out for Beatrice and realises too late that she is the only one who he has left in the world. This is a big change from the start of the when he did not respect Beatrice and showed her no love. 'You never worked in your life' Eddie started of in the play holding power over both women and was the man of the house but that has now changed. He lays on the street abandoned by all those that once looked up to him. Disowned by the Italian community and left disgraced. Yet Eddie can also be portrayed as a tragic hero, fighting for what he believes in and dying in the name of honour. ...read more.