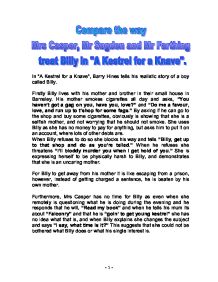 In "A Kestrel for a Knave", Barry Hines tells his realistic story of a boy called Billy. Firstly Billy lives with his mother and brother in their small house in Barnsley. His mother smokes cigarettes all day and asks, "You haven't got a gag on you, have you, love?" and "Do me a favour, love, and run up to t'shop for some fags." By asking if he can go to the shop and buy some cigarettes, obviously is showing that she is a selfish mother, and not worrying that he should not smoke. She uses Billy as she has no money to pay for anything, but asks him to put it on an account, where lots of other debts are. When Billy refuses to do so she blocks his way and tells "Billy, get up to that shop and do as you're telled." When he refuses she threatens "I'll bloddy murder you when I get hold of you." She is expressing herself to be physically harsh to Billy, and demonstrates that she is an uncaring mother. ...read more.

Mr Farthing is very sympathetic to Billy getting bullied as he is small and more vulnerable. However, he speaks to Billy with a verbally harsh tone, but to be kind: "And stop blubbering, Casper! You're not dying, lad!" Mr Farthing protects Billy, and shows MacDowall what it is like to be bullied, by physically picking on him: "What would you say if I pinned you to the floor and smacked you across the face?" Secondly, Mr Farthing tries to help Billy and talk about him getting bullied, to make himself feel better, and to stop crying. Furthermore, Mr Farthing shows great interest in Billy describing his kestrel hawk. If this was as ordinary teacher (not Mr Farthing), Billy would not have a great deal of attention provided to him. But Mr Farthing is different, and he lets Billy continue describe and share his interest with the class, and for once speak decently and make a contribution. Billy also teaches Mr Farthing of some words that he picked up in his Falconry book, eg: "Creance". ...read more.

He takes football very seriously, and he is very sadistic. Furthermore, Mr Sugden now bullies Billy physically and harshly. Mr Sugden asks Billy "Haven't you forgotton something?" and Billy replies "No, Sir" to Mr Sugden assuming he knows that he has not forgotten something. But when Mr Sugden reminds Billy "What about the showers?" he forces Billy to use the shower. Billy has no towel for the shower, so Mr Sugden threatens Billy that he'll "have to drip-dry then." Mr Sugden thought that he was being funny, but Billy didn't. Mr Sugden shoved Billy into the shower and randomly changed the temperature from HOT to COLD and then from COLD to HOT and Billy could then injure himself from that. Mr Sugden made the other boys of the class guard the doors of the showers so he couldn't get out. In conclusion, it is obvious that each character reported, treats Billy in a different way. All characters except Mr Farthing, but especially Mr Sugden either physically bullies Billy, or severely threatens to bully Billy. However, if Mr Farthing bullies Billy, it is for his own good, and to build up his confidence. ?? ?? ?? ?? - 1 - ...read more.