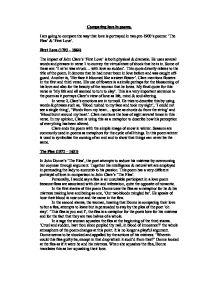 Comparing love in poems. I am going to compare the way that love is portrayed in two pre-1900's poems: 'The Flea' & 'First Love'. First Love (1793 - 1864) The impact of John Clare's 'First Love' is both physical & dramatic. He uses several words and phrases in verse 1 to convey the virtual state of shock that he is in. Some of these are: 'I ne'er was struck... with love so sudden'. This quote directly relates to the title of the poem. It denotes that he had never been in love before and was caught off-guard. Another is, 'Her face it bloomed like a sweet flower'. ...read more.

Clare mentions the loss of sight several times in this verse. In my opinion, Clare is using this as a metaphor to describe how his perception of everything has been altered. Clare ends the poem with the simple image of snow in winter. Seasons are commonly used in poems as metaphors for the cycle of all things. In this poem winter is used to symbolise the coming of an end and to show that things can never be the same. The Flea (1572 - 1631) In John Donne's 'The Flea', the poet attempts to seduce his mistress by overcoming her coyness through argument. ...read more.

'This flea is you and I', the flea is a metaphor for the poets love for his mistress and for the fact that they are two halves of a whole. In a rage the woman squashes the flea at the beginning of the third stanza. 'Cruel and sudden, hast thou since purpled thy nail, in blood of innocence?' the whole atmosphere of the poem changes at this point. It is no longer a playful argument. Donne seems to be shocked and appalled by the actions of his mistress. 'Wherein could this flea guilty be, except in that drop which it suck'd from thee?' Donne looked at the flea as if it were he and his mistress. When she squashes the flea, Donne translates this as her squashing their love. ...read more.