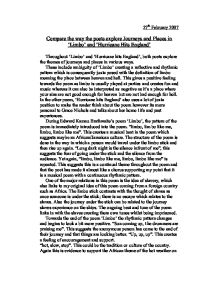 Compare the way the poets explore Journeys and Places in

27th February 2007 Compare the way the poets explore Journeys and Places in 'Limbo' and 'Hurricane Hits England' Throughout 'Limbo' and 'Hurricane hits England', both poets explore the themes of journeys and places in various ways. These include ambiguity of 'Limbo' creating a reflective and rhythmic pattern which is consequently juxta posed with the definition of limbo meaning the place between heaven and hell. This gives a positive feeling towards the poem as limbo is usually played at parties and creates fun and music whereas it can also be interpreted as negative as it's a place where your sins are not good enough for heaven but are not bad enough for hell. In the other poem, 'Hurricane hits England' also uses a lot of juxta position to make the reader think about the poem however its more personal to Grace Nichols and talks about her home 1ife and past experiences. During Edward Kamau Brathwaite's poem 'Limbo', the pattern of the poem is immediately introduced into the poem. "limbo, limbo like me, limbo, limbo like me". ...read more.

Towards the end of the poem 'Limbo' the rhythmic pattern changes and begins to look a bit more positive. "Sun coming up, the drummers are praising me". This suggests the anonymous person has come to the end of their journey and that things are looking better. "Up, up, up". This creates a feeling of encouragement and support. "hot, slow, step". This could be the tradition or culture of the country. Again this is evidence to support the African theme of the hot weather on the sand. "on the burning ground". This again is ambiguous in many ways. It could mean the slaves being tortured and being forced to stand on the burning ground, it could mean hell and that after being in limbo they are sent to hell however it could also be interpreted as hot ground because the journey has been difficult underneath your feet. 'Hurricane hits England' is also another poem in which the poet, Grace Nichols explores the idea of journeys and places. She does this in a very different way to Edward in 'Limbo'. ...read more.

Through Grace Nichols poem, she asks a lot of questions to gain her confidence in writing. These rhetorical questions get the reader to think about it and this is her way of exploring her ideas and to make the reader feel involved. 'Hurricane hits England' is a poem about a hurricane hitting an English shore which sounds unusual as they do not occur very often. The poem talks about someone talking to the storm and we get the impression she has met it before and it is not the first time. This may suggest that as she is travelling, so is the hurricane and it meets her. Grace Nichols shows the movement along side with the movement of the main character in the poem. In comparison, the two poets explore the theme of journeys and places in quite different ways. Edward Kamau Brathwaite's poem 'Limbo' is closely linked to the theme of imprisonment of slaves and there being no escape whilst being under the limbo stick. However in the other poem 'Hurricane hits England' by Grace Nichols, she concentrates more on past experiences which brings reality into the poem and as the hurricane travels, so does the poet reader and the described character. ...read more.