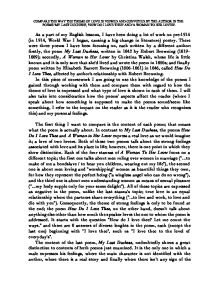 Compare the way the theme of love is viewed and conveyed by the author in the poems 'My Last Duchess', 'How Do I Love Thee' and 'A Woman to Her Lover'.

COMPARE THE WAY THE THEME OF LOVE IS VIEWED AND CONVEYED BY THE AUTHOR IN THE POEMS 'MY LAST DUCHESS', 'HOW DO I LOVE THEE' AND 'A WOMAN TO HER LOVER'. As a part of my English lessons, I have been doing a lot of work on pre-1914 (in 1914, World War I began, causing a big change in literature) poetry. There were three poems I have been focusing on, each written by a different author: firstly, the poem My Last Duchess, written in 1842 by Robert Browning (1819-1889); secondly, A Woman to Her Lover by Christina Walsh, whose life is little known and it is only sure that she'd lived and wrote the poem in 1800s; and finally poem written by Elizabeth Barrett Browning (1806-1861) in 1846, called How Do I Love Thee, affected by author's relationship with Robert Browning. In this piece of coursework I am going to use the knowledge of the poems I gained through working with them and compare them with regard to how the theme of love is expressed and what type of love is shown in each of them. I will also take into consideration how the poems' aspects affect the reader (where I speak about how something is supposed to make the poems sound/seem like something, I refer to the impact on the reader as it is the reader who recognizes this) and my personal feelings. The first thing I want to compare is the content of each poem; that means what the poem is actually about. In contrast to My Last Duchess, the poems How Do I Love Thee and A Woman to Her Lover express a real love as we would imagine it; a love of two lovers. Both of these two poems talk about the strong feelings associated with love and its place in life; however, there is one point in which they show distinction. ...read more.

- I am no doll to dress and sit for feeble worship /'' and How Do I Love Thee in ''Smiles, tears, of all my life - and, if God choose /''), it never stops the reader in the way that is to be found in My Last Duchess. That is also the only poem that uses brackets and dashes to put comments inside the speech, e.g. dashes in ''Somehow - I know not how - as if she ranked'', brackets in ''But to myself they turned (since none puts by The curtain I have drawn for you, but I) And seemed'' or both at once in ''In speech - (which I have not) - to make your will'', that not only make it sound quite special, but interestingly also reinforce the image of Duke trying to speak sophisticatedly. Furthermore, as it is the longest one, My Last Duchess leads in the number of exclamation and question marks contained, which also express the Duke's character; he is not able to control his feelings and therefore shouts, and also asks questions and then doesn't wait for the answer and continue to speak (as we can see in ''Who'd stoop to blame This sort of trifling? Even had you skill...''), which makes him seem very arrogant. The language of My Last Duchess is in my opinion the simplest, although it is still quite intriguing. It is important to remember that a dramatic monologue is a speech of one character - here the Duke - and hence the language that is used doesn't only show how the author thinks, but also something about the character, as it is supposed to be she/he who uses it. I believe that the wide range of interesting words and similes to be found in the poem, as well as mentioned comments he insets to his speech, is there to show that the Duke is doing his best to look very sophisticated, for he - in the poem - lives in the renaissance period. ...read more.

It is undoubtedly harder to find any references in A Woman to Her Lover as very little is known about the author and the origin of the poem. Yet, it is actually enough to know that the poem was written in the Victorian era, what the poem is about and that the author was a woman; we can then see that what the poem is talking about is not conforming to typical beliefs about the status of women in society at the time it was written. Victorian women were banned from universities and for most of their lives belonged to a man; father, carer, brother, husband. Anything a woman earned or had was his property and they were supposed to work for his well-being and obey him; moreover, a husband had a right to force his wife to sex or childbirth and he was the only one who could help his wife if she had problems with law. A woman could only get an independence if she was from a wealthy family and had no brothers, so she would inherit property for herself, as women were not allowed to take professional, well-paid jobs. The poem A Woman to Her Lover, however, surprisingly directly disagrees with such understanding of women's status - and more precisely such understanding of marriage. It makes it clear that obeying husbands or being forced to sex isn't acceptable and that ''any wakened woman of our time'' should oppose such things! That is an extremely revolutionary opinion, reinforced by the strength and explicitness with which it is expressed, and the poet probably wanted this. In comparison to both remaining poems, How Do I Love Thee is probably most influenced by the authors life, or it is at least possible to find something we can assume is based on personal experience. Firstly, the poem itself had been written for Robert Browning (or at least refers to author's growing relationship with him) and is the 43rd out of 44 similar sonnets, called Sonnets from the Portuguese. ...read more.