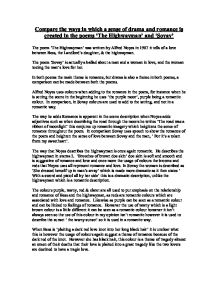 Compare the ways in which a sense of drama and romance is created in the poems 'The Highwayman' and 'Sovay' The poem 'The Highwayman' was written by Alfred Noyes in 1907 it tells of a love between Bess, the Landlord's daughter, & the highwayman. The poem 'Sovay' is actually a ballad about a man and a woman in love, and the woman testing the man's love for her. In both poems the main theme is romance, but drama is also a theme in both poems, a comparison can be made between both the poems. Alfred Noyes uses colours when adding to the romance in the poem, for instance when he is setting the scene in the beginning he uses 'the purple moor', purple being a romantic colour. In comparison, in Sovay colours are used to add to the setting, and not in a romantic way. The way he adds Romance is apparent in the scene description when Noyes adds adjectives such as when describing the road through the moors he writes 'The road was a ribbon of moonlight' this conjures up romantic imagery which heightens the sense of romance throughout the poem. In comparison Sovay uses speech to show the romance of the poem and heighten the sense of love between Sovay and the man, ' For it's a token from my sweetheart'. ...read more.

o' the moon' Bess is waiting for the highwayman to come and he isn't because she is waiting and he told her when he would come back is adding tension and a mystery, and heightening the sense of drama, as to what's happened a theme of adventure emerges from the poem and at the same time a sense of great tragedy emerges. Also in stanza seven 'A red coat troop came marching- marching- marching- King George's men came marching, up to the old inn-door.' this is a play on when in the first stanza the highwayman comes to the door 'And the highway man came riding- riding- riding- The highwayman came riding, up to the old inn-door.' this adds to the theme of tragedy as instead of the highwayman coming to the door its red coats who hunt and kill highwayman. The red coats are there because of in stanza 4 'His eyes were hollows of madness,' refers to Tim the ostler man and it suggests jealousy of the highwayman as Tim also loves Bess and hates the highwayman so because of this we get the impression that Tim sent for the red coats. Also in an ironic way the colour used most vividly to show and express Bess and the highwayman's love for one another which is red is also the colour of the coats worn by King George's men who kill the highwayman. ...read more.

The last two stanzas are echoes of the first two and that symbolises that although Bess and the highwayman are dead their love for each other still goes on and that is why the theme of romance and love is the strongest and most noticeable theme through out the poem. In Sovay what is happening is she is testing the mans love for her by dressing up and robbing him. But in the Highwayman there is already a strong sense of love between Bess and the Highwayman. In Sovay she robs her true love as a test to further her love for him , where as the Highwayman robs for his true love. In Sovay a women dresses as a man to fool her love, and in the highwayman he is dressed as a man and doesn't need to fool any one. In Sovay a sense of tragedy is created from the beginning because she is going to rob her lover, and then when she is robbing him she demands his ring and he tells her to shoot him rather than take the ring. If she shoots him she would be hung for murder. In the final verse she says if he gave her the ring she would have shot. ?? ?? ?? ?? ...read more.