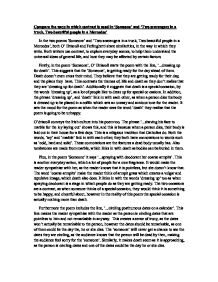 Compare the ways in which contrast is used in Someone and Two scavengers in a truck, Two beautiful people in a Mercedes

Compare the ways in which contrast is used in 'Someone' and 'Two scavengers in a truck, Two beautiful people in a Mercedes' In the two poems 'Someone' and 'Two scavengers in a truck, Two beautiful people in a Mercedes', both O' Driscoll and Ferlinghetti share similarities, in the way in which they write. Both writers use contrast, to explore everyday scenes, to help them understand the universal ideas of general life, and how they may be affected by certain factors. Firstly, in the poem 'Someone', O' Driscoll starts the poem with the line, '...dressing up for death'. This suggests that the 'Someone', is getting ready for the day ahead of them. Death doesn't even cross their mind. They believe that they are getting ready for their day, and the plans they have. This contrasts the themes of, life and death as they don't realise that they are 'dressing up for death'. Additionally it suggests that death is a special occasion, by the words 'dressing up', as a lot of people like to dress up for special occasions. In addition, the phrase 'dressing up', and 'death' link in with each other, as when a person dies the body is dressed up to be placed in a coffin which sets an uneasy and anxious tone for the reader. ...read more.

However, there are many contrast between the two pairs. To begin with the main contrast , is that one pair work as garbage men, and the other pair have a cleaner and more advanced job as there is a phrase in 'Two scavengers...', 'on the way to his architect's office' which clearly shows this. They are dressed in different ways, as the garbage men are wearing 'red plastic blazers'. The man in the more elegant couple is wearing 'a hip three-piece linen suit', and the woman is wearing 'a short skirt and coloured stockings'. Linen here is a more expensive and softer which contrasts plastic which is more uncomfortable and cheap but more functional which agrees with the garbage men's job. Linen and plastic are both opposites. In addition, both couples have different life lifestyles; however the garbage men are needed more in the democracy. Many people would expect the bin men to be looking up at the elegant and rich couple, but it is the opposite in this poem as it seems as the bin men are looking down on the rich and elegant couple. ...read more.

It makes the reader think that they may be the same in someway, even though they have clear differences. However the structure and the techniques in the poems are different. In the poem 'Someone' O' Driscoll keeps a normal structure by placing the lines beneath each other as most poems usually are. However, in the poem 'two scavengers in a truck, Two beautiful people in a Mercedes' Ferlinghetti spreads the lines across the page and doesn't have a simple structure to it like the poem 'Someone' does. To conclude, both poets do explore the universal ideas of life thoroughly which evolves the readers knowledge, of the themes of the poem further. O' Driscoll explores the ideas of everyday scenes, which a lot of people go through to get ready for life, however the true outcome of the day would be death, which the reader would sympathise with as they would know that the everyday actions the 'someone' is doing is useless. Ferlinghetti explores the universal ideas of life too, and contrasts two couples in the same democracy. He contrasts the fact that not everybody is equal, even if they are in the same democracy. These contrasts that both poets use help the reader understand the universal ideas further and how they may be affected. ?? ?? ?? ?? ...read more.