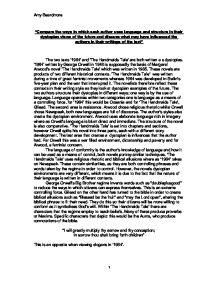 &quot;Compare the ways in which each author uses language and structure in their dystopian views of the f

"Compare the ways in which each author uses language and structure in their dystopian views of the future and discuss what may have influenced the authors in their writings of the text" The two texts '1984' and 'The Handmaids Tale' are both written as dystopias. '1984' written by George Orwell in 1948 is supposedly the basis of Margaret Atwood's novel 'The Handmaids Tale' which was written in 1985. These novels are products of two different historical contexts. 'The Handmaids Tale' was written during a time of great feminist movements whereas 1984 was developed in Stalin's five-year plan and the war that interrupted it. The novelists therefore reflect these contexts in their writing style as they look at dystopian examples of the future. The two authors structure their dystopias in different ways; one way is by the use of language. Language operates within two categories one is language as a means of a controlling force, for '1984' this would be Oceania and for 'The Handmaids Tale', Gilead. The second area is resistance. Atwood chose religious rhetoric whilst Orwell chose Newspeak, both new languages are full of discourse. The author's styles also create the dystopian environment. Atwood uses elaborate language rich in imagery where as Orwell's language is blunt direct and immediate. The structure of the novel is also comparative. 'The Handmaids Tale' is set into chapters and sections, however Orwell splits his novel into three parts, each with a different story development. The last area that creates a dystopian is influences that the author had. For Orwell this was a war filled environment, dictatorship and poverty and for Atwood, a feminist concern. The language of conformity is the author's knowledge of language and how it can be used as a means of control, both novels portray similar techniques. 'The Handmaids Tale' uses religious rhetoric and biblical allusions where as '1984' takes on Newspeak. These contain similarities, as they are both controlling phrases and words taken by the regime in order to control. ...read more.

By this, I mean the novel switches between present day, the recent past and the distant past. The present day involves the regime and Offred's thoughts about it. The recent past identifies her training to become a Handmaid with her old friend, Moira and the distant past is Offred's memories of her husband and child and growing up with her mother. During this, Atwood employs flashbacks into the recent and distant past. This is important as it keeps the main characters memories alive and allows the dystopian to be easier to live in. Atwood structures her novel into day and night times. This shows the balance between resistance and conformity. The night chapters are considerably smaller than the day chapters to accentuate the oppression of the environment. As I mentioned earlier, the day structure represents conformity to the regime and the night structure is escapism through thought equalling in resistance. Atwood places her novel into chapters and sections of relevant story developments. Another area she produced is the historical notes. These glance at another person's point of view about the regime, this is a drastic change to the rest of the novel as before the reader only witnessed one person's opinion of the society, this was by Offred. Using the historical notes you can view the novel with a different perspective on the regime, the speaker 'Professor James Darcy Pieioxto' is in some way supporting the Commander's views. "If we could identify the elusive 'Commander', we felt, at least some progress would have been made" 'The Handmaids Tale' is left unfinished in the eyes of the characters. We do not receive much detail but from the historical notes, we gather that Offred was rescued in the 'black van' that collected her at the end of the novel and that she then recorded her tale onto tape. This structure is completely different in '1984' as instead of sections Orwell opted for three parts. ...read more.

This happened because the regime lent so much money it created high debt. However the borrowed money was used to finance activities such as gross corruption, invasion and human rights violations. In conclusion, both novels share themes of totalitarianism, loss of identity and survelliance to an extreme. Language plays an important part in 'The Handmaids Tale' and '1984', it is seen as a means of control within their regime. Both authors develop similar technics by the means of allusions, slogans, euphemisms and categorisation. However, they have very different outcomes as Atwood uses religious beliefs where as Orwell conveys war-approved language, also the nature in which it is used is different. The author's narrative styles differ in context and basic structure. Orwell sticks with war outcomes of poverty and sickness in his semantic fields too. However Atwood uses non-human nature, the body and feritility, the opposite to Orwell. The novels do become similar when '1984' is at the Golden Country as Orwell's language developes metaphorically. Conformity is portrayed in the day structure of Atwood's novel and part one of Orwell's. Resistance increases for both the main characters in both novels, 'The Handmaids Tale' at night and '1984' in parts two. The novels structures are different too, as '1984' is in parts each representing a different story line development. 'The Handmaids Tale' is in sections containing passage of time unlike '1984', which has no sense of time present in its structure. The author's influences play a massive part on the dystopian environment. Orwell was influenced by war, poverty and regimes, which is highly reflected in his novel. Margaret Atwood reflects feminism into her novel as her background contains strong feminist movements and she even portrays this within the characters Offred's mother and Moira. The novels are very different in context of dystopian environments though they contain similarities. The authors have no similarities in the influences of their novels. This is what alters their views, the time difference that the novels were written in. However, language and structure has a great impact on the environment of the novels and the dystopian writing of the texts. ...read more.