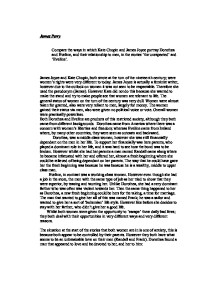 James Perry Compare the ways in which Kate Chopin and James Joyce portray Dorothea and Eveline, and their relationship to men, in the stories 'the unexpected' and 'Eveline'. James Joyce and Kate Chopin, both wrote at the turn of the nineteenth century; were women's rights were very different to today. James Joyce is actually a feminist writer, however due to the outlook on women it was not seen to be respectable. Therefore she used the pseudonym (James). However Kate did not do this because she wanted to make the stand and try to make people see that women are relevant to life. The general status of women on the turn of the century was very dull. Women were almost taken for granted, also were very reliant to men, largely for money. The women gained their status via men, also were given no political voice or vote. Overall women were practically powerless. Both Dorothea and Eveline are products of this restricted society, although they both came from different backgrounds. Dorothea came from America where there was a concern with women's liberties and freedom; whereas Eveline came from Ireland where, by many other countries, they were seen as outcasts and backward. Dorothea, was a middle class women, however she was still financially dependant on the men in her life. To support her financially was here parents, who played a dominant role in her life, and it was hard to see how the bond was to be broken. ...read more.

The fear of her farther is found also in the sentence before "her farther used often to hunt them in out of the field with his blackthorn stick"; this quotation shows that the farther treated his children like animals; this is implied by the use of 'hunt'. By the use of 'blackthorn stick' it appears that her farther used to beat them as this is a very harsh thorny stick which gives connotations of torture as the weapon is so brutal. The opening lines of 'Eveline' immediately indicate that she is leading a life in which she is trapped, and a life which, although unpleasant, she has become to depend on because this is the only way that she has known: She sat at the window watching the evening invade the avenue. Her head was leaned against the window curtains and in her nostrils was the odour of dusty cretonne The opening sentence implies that she is lazy and has nothing to be worried about. However, at the start of the next sentence it uses an action but in a passive way. This gives it the connotations of somebody that is 'trapped' like a prisoner; this is a contrast to the previous sentence because it moves from a person with no worries to a person with the world on their shoulders. Also the use of 'dusty' my give referrals to her life at present. ...read more.

This quotation also has connotations of a captive animal like a tiger in a circus where when its owner calls it has to come or there will be consequences. However, Dorothea lets Randall go for the reason that she can have her own life free from her depression and be independent. "Seemingly borne on by some force other than mechanical" this reads from first impression that she is running scared from something, especially Randall. However the use of 'mechanical' suggests that she is not running scared but running with good intentions for her welfare in mind. "bent her supple body to one purpose - that was, swiftest flight" The way that she ran here, makes the reader think of her as inhuman, and that for nothing she is going to stop for nothing; therefore there must be a strong reason for her to run away. The use of the superlative 'swiftest' shows that this, running away from what most women dream of, which means that no matter how rich Randall was nor how much respect that she could have had, she finds her independence more important than these factors. In my opinion of the stories, both 'The Unexpected' and 'Eveline' give a very real image to the reader; it depicts the way that women were treated around this era. This is because both were offered so much, by respect and riches, and they both turn these opportunities down due to the fact that freedom is more important or a promise restricts them. ...read more.