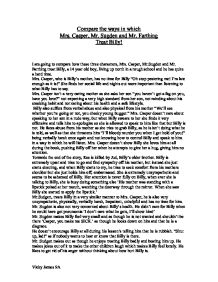 Compare the ways in which Mrs. Casper, Mr. Sugden and Mr. Farthing Treat Billy! I am going to compare how these three characters, Mrs. Casper, Mr.Sugden and Mr. Farthing treat Billy, a 14 year old boy, living up north in a rough school and he has quite a hard time. Mrs. Casper, who is Billy's mother, has no time for Billy "Oh stop pestering me! I'm late enough as it is!" She finds her social life and nights out more important than listening to what Billy has to say. Mrs. Casper isn't a very caring mother as she asks her son "you haven't got a fag on you, have you love?" not expecting a very high standard from her son, not minding about his smoking habit and not caring about his health and a safe lifestyle. Billy also suffers from verbal abuse and also physical from his mother "We'll see whether you're going or not, you cheeky young bugger." ...read more.

She is extremely unsympathetic and seems to be ashamed of Billy. Her attention is never fully on Billy, when ever she is talking to Billy, she is busy doing something else 'His mother was standing with a lipstick poised at her mouth, watching the doorway through the mirror. When she saw Billy she started to apply the lipstick.' Mr.Sudgen, treats Billy in a very similar manner to Mrs. Casper, he is also very unsympathetic, physically, verbally harsh, Impatient, unhelpful and has no time for him. Mr. Sugden is also not very concerned about Billy's health. He didn't care for Billy when he could have got pneumonia 'I don't care what he gets, I'll show him!' Mr. Sugden makes Billy feel very small and as though he is not wanted and shouldn't be there 'Casper, you make me SICK.' as though he looks down on him and that he is a disgrace. He doesn't encourage Billy at all during his lesson's telling him that he is rubbish. ...read more.

Mr. Farthing also makes time for Billy, to go and watch him fly his kestrel, which Billy really appreciated as it was the only time he got some attention from something else apart from Kes. Mr. Farthing encourages Billy in class which makes him more confident. He shows his appreciation to Billy; 'Well done Billy. That was very good.' He treats him like any other pupil, though being stern when telling Billy off for falling asleep in lesson time, he is still treating Billy the same as any toher teacher would to any pupil that feel asleep. Though out this book, Billy only ever received any attention from his English teacher rather than his mother, which shows how little Mrs. Casper attempted to talk and care about her son, or that Mr. Farthing made a big effort, but over all Billy still wasn't a very cared about child, and he felt lonely and unwanted until he got his kestrel which was the only thing he loved in his love. ?? ?? ?? ?? Vicky James 9A ...read more.