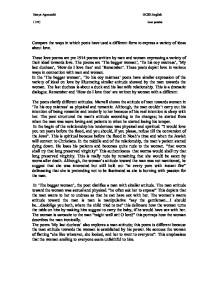 Compare the ways in which poets have used a different form to express a variety of ideas about love.

Compare the ways in which poets have used a different form to express a variety of ideas about love. These love poems are pre 1914 poems written by men and women expressing a variety of their ideal towards love. The poems are 'The beggar woman', 'To his coy mistress', 'My last duchess', 'How do I love thee' and 'Remember'. These poets depict love in various ways in connection with men and women. In the 'The beggar woman', 'To his coy mistress' poets have similar expression of the variety of ideal on love by illustrating similar attitude showed by the man towards the woman. The last duchess is about a duck and his last wife relationship. This is a dramatic dialogue. Remember and 'How do I love thee' are written by woman with a different The poets clarify different attitudes. Marvell shows the attitude of men towards women in 'To his coy mistress' as physical and romantic. Although, the man couldn't carry out his intention of being romantic and tenderly to her because of his real intention is sleep with her. The poet structured the man's attitude according to the changes; he started from when the man was more loving and patients to when he started losing his temper. In the begin of the relationship his tenderness was physical and spiritual. ...read more.

The poem explores different stages and different types of relationship. In 'The beggar woman' there is no relationship established between the woman and the man. "ben't angry that we part " this shows that their relationship was not successful and that it why they part. In this poem, the man's has power as a squire but at the end the woman who is the beggar makes the man seem foolish by tricking the man. "but, ere you get another...to try a year or how you'll keep this " this authentic how she trick the man by telling him; If he will be able to able to take care of the baby, the she would give him another. This also illustrates how the woman ends up the man's power, by tricking him and letting him out what he wanted from her. In 'To his coy mistress' the poet wants to move on to a different stage of relationship. Although, their relationship is not yet established as their relationship seems one sided "that coy preserved virginity" this depicts that the woman has not any sexual intercourse with him. This also shows that relationship with the woman is not so interested in having any sexual intercourse with the man. ...read more.

And the man sees it as a physical and sexual factor. The poets' use of language presents the ideal of love as romantic in 'how do I love thee' the poet repeats "I love thee" so much which depicts that she loves the man deeply. She use religious terminology like "faith, praise and grace" this contrast with the male poets. Marvels use euphemism and innuendo to show the man's intention "let us roll all our strength and all roll our sweetness up into one ball" this symbolises that the man wants to have sex with. This is similar to king, he uses emphemision to describes the man's intention "what if we should retire a little way into the wood?". This portrays that the man wants to go into a confidential area in order to have sex with the woman. The context of in "The beggar woman" reflex to about 400 years ago when the poem was written. This is because in those day people had different class according to their social status. The squire is of a higher class than the than the beggar who might be the lower class. The messenger in this poem is that you shouldn't have sex when you are not get ready Nonye Agwunobi GCSE English 11PC love poems ...read more.