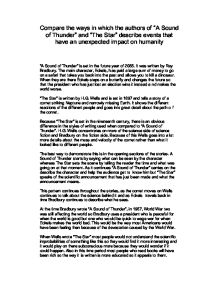 Compare the ways in which the authors of

Compare the ways in which the authors of "A Sound of Thunder" and "The Star" describe events that have an unexpected impact on humanity "A Sound of Thunder" is set in the future year of 2055. It was written by Ray Bradbury. The main character, Eckels, has paid a large sum of money to go on a safari that takes you back into the past and allows you to kill a dinosaur. When they are there Eckels steps on a butterfly and changes the future so that the president who has just lost an election wins it instead and makes the world worse. ...read more.

A Sound of Thunder starts by saying what can be seen by the character whereas The Star sets the scene by telling the reader the time and what was going on at that moment. As it continues "A Sound of Thunder" carries on the describe the character and help the audience get to know him but "The Star" speaks of the scientific announcement that has just been made and what the announcement means. This pattern continues throughout the stories, as the comet moves on Wells continues to talk about the science behind it and as Eckels travels back in time Bradbury continues to describe what he sees. ...read more.

In both stories the world is changed. In "The Star" the world changes how it sees things and that worse things can happen and you should look at things from different points of view. "...how small the vastest of human catastrophes may seem, at a distance of a few million miles" In "A Sound of Thunder" the world was physically changed as a different president came to power and decided to attack countries and start wars, making the world a worse place. I preferred "A Sound of Thunder" by Ray Bradbury because I feel that it gives a better mental picture of what is going on and that is what I look for in a story. I also did not like reading the scientific explanations for everything in "The Star". ...read more.