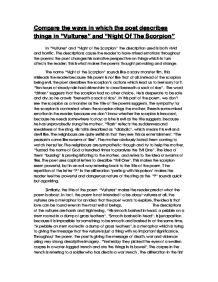 Compare the ways in which the poet describes things in Vultures and Night Of The Scorpion&quot;

Compare the ways in which the poet describes things in "Vultures" and "Night Of The Scorpion" In "Vultures" and "Night of the Scorpion" the description used is both vivid and horrific. The descriptions cause the reader to have mixed emotions throughout the poems; the poet changes his narrative perspective on things which in turn affects the reader; this is what makes the poems thought provoking and strange. The name "Night of the Scorpion" sounds like a scary monster film. This misleads the reader because this poem is not like that at all. Instead of the scorpion being evil, the poet describes the scorpion's actions which lead us to feel sorry for it. "Ten hours of steady rain had driven him to crawl beneath a sack of rice". The word "driven" suggests that the scorpion had no other choice. He is desperate to be safe and dry, so he crawls "beneath a sack of rice". In this part of the poem, we don't see the scorpion as a monster as the title of the poems suggests. The sympathy for the scorpion is contrasted when the scorpion stings the mother. There is some mixed emotion in the reader; because we don't know whether the scorpion is innocent, because he needs somewhere to stay; or is he is evil as the title suggests, because he has unprovokedly stung the mother. ...read more.

The lack of sympathy from the poet can be shown in the repetition of "they said". This is said, because the poet is trying to show that it was opinion and not fact, what they were saying. Their behaviour seems to be superstitious and unhelpful to him. In their prayers, they say that the mother has sinned in a previous life. This is cultural, because they believe in reincarnation, but also superstitious, because the sins from the mother's previous life, has caused the mother to be bit, as a punishment. The poet seems unhappy about what they are doing and believe in. By using "they said", so many times, is to clarify that he does not agree with their cultural beliefs. Many of the lines in this part of the poem begin with "may", which makes what the neighbours say sound like a prayer or incantation and the poet finds these incantations and superstitions silly and pointless. His descriptions make the mud hut sound very compact and claustrophobic. It is full of lanterns and candles and shadows and clicking tongues, which adds to the tension of the moment. The repetition of "and" helps to build the feeling of pressure and tension. We can see why the scorpion would want to escape the hut and we feel that the poet would like to as well. ...read more.

Having been silent throughout the poem, she thanks God that she was bitten and not her children. This is supporting the idea that the love a mother has for her children is the ultimate in all types of love. The mother speaks in a new stanza entirely, which makes the reader think that this must be important. The conclusion of "Vultures" is more ambiguous. The last stanza leaves readers with many questions about love. It says that at least the father loves his children, that there is a "tiny glow-worm" of love and compassion in him. But it also asks if that is enough, because the "ogre" can love his children, the vulture can love his companion. This is love, but only for other family members. If love is only felt for family members, then does this mean that acts of cruelty and violence can be carried out against anyone who is not in the family? For me, the conclusion of "Vultures" is quite negative. The whole tone of the poem and the descriptive use of imagery is negative and depressing. I think that the poets feel that there is not enough love in this world for people not to harm each other. The message of "Night of the Scorpion" is simple. It says that time heals and love does not need exploring, it is what it is. For this, this conclusion is positive, but less question arising than that of "Vultures". ?? ?? ?? ?? ...read more.