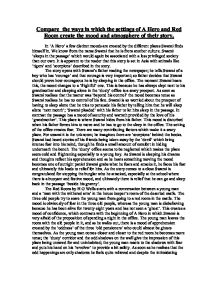 Compare the ways in which the settings of A Hero and Red Room create the mood and atmosphere of their story.

Compare the ways in which the settings of A Hero and Red Room create the mood and atmosphere of their story. In 'A Hero' a few distinct moods are created by the different places Swami finds himself in. We know from the name Swami that he is from another culture. Swami 'sleeps in the passage' which would again be associated with a less privileged society than our own. It is apparent to the reader that this story is set in Asia with animals like 'tigers' and 'scorpions' described in the story. The story opens with Swami's father reading the newspaper; he tells Swami of a boy who has 'courage' and that courage is very important; so father decides that Swami should prove how courageous he is by sleeping in the office. The moment Swami hears this, the mood changes to a 'frightful' one. This is because he has always slept next to his grandmother and sleeping alone in the 'dusty' office is a scary prospect. ...read more.

The Red Room by H G Wells starts with a conversation between a young man and a 'man with the withered arm' in the house keeper's room of the deserted castle. The three old people try to scare the young man from going to a red room in the castle. The mood is obviously of fear in the three old people, whereas the young man is disbelieving because he has been alive for twenty eight years and has not seen a 'ghost'. This creates a mood of confidence, which contrasts with the beginning of A Hero in which Swami is very afraid of the proposition of spending a night in the office. The young man leaves the room with the old people in it, and as he walks out, there is a mood of apprehension created by the 'oddness' of the three 'old pensioners' who could almost be ghosts themselves. As the young man comes closer and closer to the red room he becomes more tense; the 'dusty' corridor and the odd shadows on the wall give the impression ...read more.

In 'The Red Room' the young man has a battle with his surroundings to stop the 'shadows' engulfing him. He fears a physical thing which is happening to him, whereas in A Hero the majority of Swami's fear comes from his mind. The 'Red Room' has a mysterious quality which immediately evokes fear; there are many stories surrounding the room which put a doubt into the young man's mind. When he enters the room he does not believe that the red room is haunted, but as the darkness comes in, the room seems to attack him and he does believe. The mood is created not only by the room but by the darkness. In 'The Red Room' the young man starts to believe in the stories that surround the red room whereas in 'A Hero' Swami finds out that what he fears in the office is not real. The mood of fear that is present in the office is the same fear as that created in the red room, but one sense of fear is created from the boy's mind and the other from the engulfing darkness of the setting. ...read more.