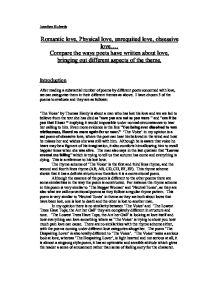 Compare the ways poets have written about love, bringing out different aspects of the theme

Jonathan Richards Romantic love, Physical love, unrequited love, obsessive love.... Compare the ways poets have written about love, bringing out different aspects of the theme. Introduction After reading a substantial number of poems by different poets concerned with love, we can categorise them in their different themes as above. I have chosen 5 of the poems to evaluate and they are as follows: 'The Voice' by Thomas Hardy is about a man who has lost his love and we are led to believe from the text she has died as "now you are not as you were " and "can it be you that I hear " implying it would impossible under normal circumstances to hear her calling to him. Even more evidence is the line "You being ever dissolved to wan wistlessness, Heard no more again far or near." 'The Voice' in my opinion is a sad poem of obsessive love, where the poet can hear his beloved in the wind and how he misses her and wishes she was still with him. Although he is aware that voice he hears may be a figment of his imagination, it also comforts him allowing him to recall happier times when she was alive. The man also says in the last quatrain that "Leaves around me falling" which is trying to tell us that autumn has come and everything is dying. ...read more.

He is aware that although his feeling are true, hers are not and the love is doomed to be one sided, although he loves her dearly he will always someone from the past as far as she is concerned, as in the line "Your face, and the god -curst sun, and a tree, And a pond edged with greyish leaves." This is how he will remember her. This poem, just like the beggar woman is a conventional poem as lines one and two rhyme, three and four and so on this show the poem is composed of rhyming couplets. 'Neutral Tones' is a very similar poem to 'The Despairing Lover' as they both come under the category of unrequited love, but the mood and tone are very different. One is light-hearted the other is depressing and serious. The rhyme scheme for the two poems is very similar to 'The Beggar Woman' as the poem's rhyme schemes stay constant throughout the poems. 'The Beggar Woman' also has a simile, which is unlike any other poems except for 'Neutral Tones', which also contains a simile. 'The Beggar woman' is a poem of physical love written by William King (1663-1712). This poem is about when "A gentleman in hunting rode astray" to meet "A beggar by trade; yet not so mean." ...read more.

and none of the lines rhyme in the last verse, but the endings of the words match, e.g. Heat and great, and speak and break. The first verse has ten syllables per line like a sonnet except for line 2 and so does the last verse except for line 7. This poem is the only one that uses metaphors to relate the essence of the poem, which is love can be experienced by anyone or any thing at anytime, and is not restricted to a particular being. The poem is similar to Beggar Woman in its structure being a regular rhyming pattern. This is the only poem out of the five, which glorifies love for its own sake, and does not have any particular characters, making it unique from the rest. Conclusion I have evaluated the poems and the conclusion I have reached is all the poems have a structure and form, some of them are similar in structure and content, some only in theme, others though, are relatively similar in subject which can be humorous or sad. The writer can determine this by the style and content that he or she decides to use. Love poems can be categorised into differing themes of love, but all have certain things similar about them. Love is an emotion and as such evokes feelings on reading them. Some make us happy others sad but all of them still relate to us emotionally even so long after they were written. ...read more.