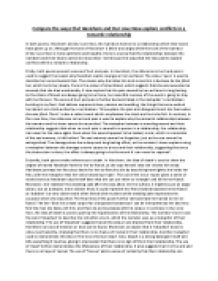 ï»¿Compare the ways that Havisham and Our Love Now explore conflicts in a romantic relationship In both poems, Havisham and Our Love Now, the narrators hold on to a relationship which their lovers have given up on. Although the tone of Havisham is bitter and angry while the tone of the narrator of Our Love Now is more optimistic and hopeful, there is a sense that the relationships between the narrators and their lovers cannot be reconciled. I will discuss the ways that the two poems explore conflicts within a romantic relationship. Firstly, both poems present a sense of hurt and pain. In Havisham, the reference to hurt and pain is used to suggest the reason why Havisham wants revenge on her ex-fiancé. The colour ‘puce’ is used to describe her curses towards him. The reason why she hates him and curses him is because he has jilted her, which hurts her deeply. Puce is the colour of dried blood, which suggests that she was wounded so severely that she bled emotionally. ...read more.

Secondly, both poems make references to death. In Havisham, the idea of death is used to show the degree of hatred Havisham feels for her ex-fiancé, as she says herself, that she ‘wishes him dead’. Havisham portrays her ferocious desire for her ex-fiancé to die by describing how tightly she holds her fists, with the metaphor that her veins becoming ‘ropes’. The use of the noun ‘ropes’ gives a sense of morbid tone as Havisham says herself later that she can use them to ‘strangle’ and kill her ex-fiancé. Moreover, she ‘stabbed’ the wedding cake after she was jilted. On the surface, it might be just an angry action, but on a deeper, more sinister level, it could represent her fierce hatred towards her ex-fiancé as ‘stabbed’ is a very violent word often linked with murders while wedding cake represents the occasion which she was jilted. The final lines of the poem further demonstrate her hatred to her ex-fiancé. ...read more.

Similarly, in Our Love Now, the regular structure also suggests that the chance of the relationship between the narrator and his lover getting better is dim, especially when the tone of the narrator?s lover is so indifferent; it is not likely for a big change to occur hat bring about hope in their relationship. It also highlights the theme that the pain and hurt a person experiences in a relationship can have a serious effect on the relationship itself and when too much pain and hurt is experienced, love can be extinguished forever. In conclusion, both poems have a range of effective methods to show conflicts in a romantic relationship, but I enjoy Havisham more as the use of oxymoron like ?beloved sweetheart bastard? strongly and effectively shows the emotional struggle the narrator experiences. It also explains why the event has such a powerful effect on her. After all, if she does not love him, she would not be hurt so deeply, nor would she hold on so strongly to the memory. ...read more.