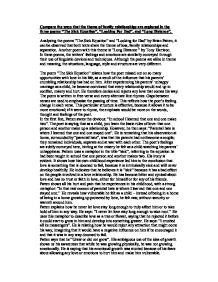 Compare the ways that the theme of family relationships are explored in the three poems "The Sick Equation", "Looking For Dad", and "Long Distance". Analysing the poems "The Sick Equation" and "Looking for Dad" by Brian Patten, it can be observed that both texts share the theme of loss, family relationships and separation. Another poem with this theme is "Long Distance " by Tony Harrison. In these poems, the writers' feelings and emotions are similarly conveyed through their use of linguistic devices and techniques. Although the poems are alike in theme and meaning, the situations, language, style and structure are very different. The poem "The Sick Equation" relates how the poet missed out on so many opportunities with love in his life, as a result of the influence that his parents' crumbling relationship has had on him. After experiencing his parents' unhappy marriage as a child, he became convinced that every relationship would end up in conflict, misery and hurt. He therefore denies and rejects any love that comes his way. The poem is written in free verse and every alternate line rhymes. Gaps between verses are used to emphasise the passing of time. This reflects how the poet's feeling change in each verse. This particular structure is effective, because it allows it to be more emotional; if it were to rhyme, the emphasis would be more on the words, thought and feelings of the poet. ...read more.

This is effective, because in each verse, the father evidently becomes less able to cope with the loss of his wife. He denies her absence to himself with a pretence that she has only gone to get the tea ready and will soon return, continuing the daily routine as if she were still alive and nearby. The title of the poem is significant, because the wife has been dead a long time -two years, and is in some distant place where they cannot contact or see her. In addition, when the father later dies, the son still tries to call him, "The disconnected number I still call", which could be seen ironically as a long distant call. Moreover, the relationship between the son and the father is distant. This is because the father does not share his feelings with his son, hiding from him the evidence of his way of coping, in case he may appear foolish to his son. His father's way of coping is to continue his life as if his wife had not died; there is a hint of some disdain from the son towards his father for this. However, we learn at the end of the poem that the son actually ends up doing something similar himself - calling his father's disconnected number after his death. ...read more.

The poem ends by saying that the boy is now sitting in his "very tidy room", hoping his dad will come back. Harrison is perhaps hinting here that the boy has changed his previous habit of untidiness in the unconscious hope that this will make everything in his life come back to normal and be all right again. While "Sick Equation" and "Looking for Dad" are both poems where the person is talking about himself to us, "Long Distance" is the only poem in which the writer is talking to his dead father, the subject of his poem. It is like a confession: he tells his father he realised he could not cope with the reality of her death, admits he looked down on his father at the time for this and confesses that he now cannot totally accept his father's death and his way of coping is to ring his number. All three poems share the theme of reaction to loss of a loved one and how people find something or someone to blame for their loss: the little boy blames himself in "Looking For Dad", the man blames love for its "sickness", in " The Sick Equation", and the son blames his dad for not being able to accept his wife's death in "Long Distance". Although the poems share similarities, "Looking For Dad" stops at his childhood experience, "The Sick Equation" is a resume of his emotional life and "Long Distance" is a description of two years of grief. ...read more.