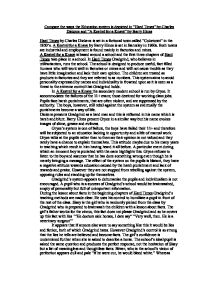 Compare the ways the Education system is depicted in &quot;HardTimes&quot; by Charles Dickens and &quot;A Kestrel for a Knave&quot; byBarry Hines

Compare the ways the Education system is depicted in "Hard Times" by Charles Dickens and "A Kestrel for a Knave" by Barry Hines Hard Times by Charles Dickens is set in a fictional town called "Coketown" in the 1850's. A Kestrel for a Knave by Barry Hines is set in Barnsley in 1960s. Both towns are industrial and employment is found mainly in factories and mines. A Kestrel for a Knave is based around a school and the first three chapters of Hard Times take place in a school. In Hard Times Gradgrind, who believes in utilitarianism, runs the school. The school is designed to produce useful, fact filled humans who will work well in factories or mines and will not cause trouble as they have little imagination and lack their own opinion. The children are treated as products in factories and they are referred to as numbers. This system aims to avoid personality expressed by names and individuality is frowned upon as it is seen as a threat to the extreme control that Gradgrind holds. In A Kestrel for a Knave the secondary modern school is run by Gryce. ...read more.

Whereas Sissy who has not yet become fully educated by Gradgrind still appears alive. "She seemed to receive a deeper and more lustrous colour from the sun." She is also positioned in the classroom so that she receives the most light from the beam of sunshine. This makes her appear special and maybe even heavenly. Dickens uses this idea to highlight the difference between Gradgrind's ideal and Sissy who has not yet given into the dehumanisation. One lesson we witness in A Kestrel for a Knave also aims to teach the pupils about facts. However this lesson is taught by Farthing who is caring and a more fatherly teacher and this is communicated by his name. Mr Farthing has used his kind personality to gain some respect from the boys in the class. Although the lesson has the same content as the lesson in Hard Times during the lesson it becomes obvious that Farthing's teaching is different. He manages to involve Billy, who is normally quite shy and lacking motivation, positively in the lesson. Farthing teaches in a more relaxed way and lets the lesson flow as well as welcoming input from the boys. ...read more.

The education system presented by Charles Dickens is extreme and unnecessarily harsh. However the title Hard Times makes it seem like Dickens is writing honestly about a time which lead to harsh methods of education. He highlights the naivety of the people as now teaching methods have improved and young people are encouraged to be themselves and achieve the best that they can. Satire is used by Dickens to emphasize the mistakes of the system. Charles Dickens could of attended a school like the one in Hard Times and so I think he aims to make the problems obvious to people who otherwise might not notice the wrongs in society. Barry Hines also writes the truth about the education system in his era and I think he also aims to highlight the incorrectness of the organization. However Barry Hines writes more realistically as the book is more recent and therefore easier to relate to. Both authors present systems, which now seem very wrong but at the time they were thought of as acceptable. Both books probably contain memories of the authors' school days and particularly in A Kestrel for a Knave the scenes seem very believable. I could conclude that neither system would be justifiable now but in their time the schools seemed fair. ...read more.