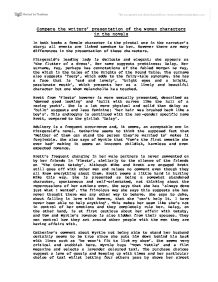 Compare the writers&amp;#146; presentation of the women characters in the novels

Compare the writers' presentation of the women characters in the novels In both books a female character is the pivotal one in the narrator's story; all events are linked somehow to her. However there are many differences in the presentation of these characters. Fitzgerald's leading lady is delicate and elegant; she appears as 'the flutter of a dress'. Her name suggests prettiness: Daisy. Her surname, Fay, perhaps has connotations of the fabled Morgan Le Fay, the witch in the tales of the Knights of the Round Table. The surname also suggests 'faery', which adds to the fairy-tale synonyms. She has a face that is 'sad and lovely', 'bright eyes and a bright, passionate mouth', which presents her as a lively and beautiful character but one whom melancholia has touched. Brett from 'Fiesta' however is more sexually presented, described as 'damned good looking' and 'built with curves like the hull of a racing yacht'. She is a lot more physical and solid than daisy as 'built' suggests and less feminine: 'her hair was brushed back like a boy's'. This androgyny is continued with the non-gender specific name Brett, compared to the girlish 'Daisy'. Adultery is a frequent occurrence and, it seems, an acceptable one in Fitzgerald's novel. ...read more.

Jordan's body is also mentioned frequently throughout the novel, except she is graceful and delicate; her lips 'flutter' and she moves a page with a 'flutter of slender muscles in her arm'. Jordan's body, in contrast to Myrtle's, is talked about in a more muscular manner, she is toned and healthy rather than corrupted and indulgent like Myrtle. Jordan's body is not so sexual: 'she wore her evening-dress, all her dresses, like sports clothes' and there is a 'jauntiness about her movements'. Brett's sexuality is not often mentioned. The only mentions of it are the comment about being built like a 'racing yacht' and when Brett wears a sleeveless black evening dress but Jake sticks to a simple 'she looked quite beautiful'. This suggests that she is very attractive but that Jake doesn't remind himself of it rather than that she is quite plain most of the time. However, the one part of her that is talked about is her eyes. They 'wrinkle' at people when she smiles. This suggests that she isn't really smiling, and that rather she just 'crinkles' her eyes. She never seems completely happy or at rest with herself in the novel. ...read more.

The car represents an object of freedom to the women: it destroys Myrtle, Daisy allows it to get fatally out of control and Jordan misuses it by not being able to drive properly. Fitzgerald's women are presented as socially brilliant but morally and economically passive because their world really has no use for them. Fitzgerald was fully aware of the change in the role of women in the post-war era but viewed it with mixed feelings. Jordan Baker's emancipation shows aggression in her and Daisy, although she has the means to be free, prefers to retain her wealth and social position rather than risk it to make a real attempt to secure true freedom, and keep the privileges of a safe, conventional role. Brett is also emancipated but it still doesn't seem to satisfy her. She does exactly what she wants but is still not happy. Fitzgerald's women are carefully documented in a detailed, romantic and imaginative manner that evokes the air of their presence explicitly. Myrtle is presented as a licentious adulterer with pretensions, Daisy as an extemporising and mystically attractive flower and Jordan as an enigmatic, cynical and contemptuous liar. Hemmingway's Brett is created for us by her actions rather than her appearance and is strong-willed, emotionally driven and androgynous. ...read more.