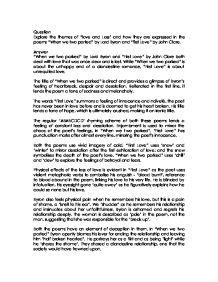 He is blinded by infatuation, his eyesight gone 'quite away' as he figuratively explains how he could se none but his love. Byron also feels physical pain when he remembers his love, but this is a pain of shame, a 'knell to his ear'. We 'shudder' as he remembers his relationship and insinuates about her unfaithfulness. Byron is ashamed and regrets his relationship deeply. The woman is described as 'pale' in the poem, not the man, suggesting that she was responsible for the 'break up'. Both the poems have an element of deception in them. In "When we two parted" Byron openly blames his lover for ending the relationship and leaving him 'half broken hearted'. He portrays her as a flirt and as being 'light' while he 'shares the shame'. ...read more.

'Pale' also fore shadows an unhappy end to his love. Personification and hyperbole abound as he is carried away by his infatuation, but again, 'clay' and 'aid' suggest that all is not well. By the last stanza, innocence has turned to weary experience as he asks the rhetorical question - 'Are flower's the winter's choice?' He is dejected but the last stanza shows a hint of acceptance - but not forgiveness, as he blames her very soul for deceiving him. "When we two parted" and "First Love" both speak about the loss of love. Sometimes it is one sided (and has turned to hate), blaming the woman who ended Byron's relationship 'thy vows are all broken' and sometimes unrequited, but not forgotten, as with John Clare. But to both the poets, love is a beautiful feeling to be enjoyed, only regretted when it is over. ...read more.

The writer of this essay could clearly have made a much better job of it. Sentence construction, phrasing and lexis demonstrate a high standard of achievement, but the essay is marred by many small mistakes and offhand statements unsupported by references to the texts. It is also much too short for an essay comparing two major poems. Paragraphs are too short on the whole - some which are on the same theme could be combined.

With more application and dedication to the task, this writer could easily have achieved 5 stars.