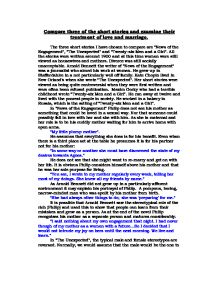 Compare three of the short stories and examine their treatment of love and marriage.

Compare three of the short stories and examine their treatment of love and marriage. The three short stories I have chosen to compare are "News of the Engagement", "The Unexpected" and "Twenty-six Men and a Girl". All the stories were written around 1900 and at this time women were still viewed as housewives and mothers. Divorce was still socially unacceptable. Arnold Bennett the writer of "News of the Engagement" was a journalist who aimed his work at women. He grew up in Staffordshire in a not particularly well off family. Kate Chopin lived in New Orland's when she wrote "The Unexpected". Her short stories were viewed as being quite controversial when they were first written and were often been refused publication. Maxim Gorky who had a terrible childhood wrote "Twenty-six Men and a Girl". He ran away at twelve and lived with the poorest people in society. He worked in a bakery in Russia, which is the setting of "Twenty-six Men and a Girl". In "News of the Engagement" Philip does not see his mother as something that could be loved in a sexual way. Nor that someone could possibly fall in love with her and she with him. ...read more.

"His skin was waxy and hectic, red upon the cheek-bones. His eyes were sunken; his features pinched and prominent; and his clothing hung loosely upon his wasted frame." This is a great contrast to the portrait, which hung from her wall. She was in love with the "almost perfect specimen." She loved for his physical looks and when they detiorated, she is left with nothing to love him for. "'...You will come back, well and strong; it will be enough then,' and to herself she was saying: 'never, never, never!'" When Randall insists that the marriage should commence immediately, Dorethea procrastinates. But Randall is adamant that: "...the strongest of us cannot count upon life. If the worst should come I want you to have all I possess." This could be seen as blackmail. Dorethea should accept Randall's illness as if he does pass away she will be left with his riches. This shows another stereotype; that women are the 'gold diggers' and marry for money. Dorethea however refuses his offer of everything he owned. This is an unexpected reaction for the stereotypical role that women should follow. She has no interest for his money as she presumably has enough herself. ...read more.

On one side were those who were like a daughter; pure with their virginity intact and on the other side were dirty, sluttish women. Tanya then fails to resist a pompous, lascivious soldier and in the men's eyes, their idol has toppled. She had crossed the line and had now become a common slag. She was reduced to the level of the other loose-moraled women: "We surrounded her and reviled her maliciously, without restraint, heaping obscenities on her." I think this story shows you can love someone for who you imagine them to be even if you never really know them. The workers never really knew Tanya; they built up an image of her in their minds. When their image was annihilated by her behaviour they were heart broken. They imagined Tanya as a stereotype virgin goddess. The stereotype was once again obliterated as it was in the other two short stories. Each Short Story treats love and marriage in a different way this may be because of different circumstances. They were all written in different counties but they are all controversial. "News of the Engagement" by its view on mothers re-marrying. "The Unexpected" for its stereotypical role reversal. "Twenty-six men and a girl" as it questions the need for icons in a poverty stricken life style. In each story stereotypes of people are followed and then abolished. ...read more.