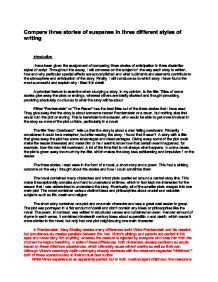 Compare three stories of suspense in three different styles of writing Introduction I have been given the assignment of comparing three stories of anticipation in three dissimilar styles of script. Throughout this essay, I will converse on the subject of the way each story is written, how and why particular special effects are accomplished and what rudiments and elements contribute to the atmosphere and anticipation of the story. Finally, I will conclude as to which story I have found the most successful and explain why I liked it in detail. A principal feature to examine when studying a story, in my opinion, is the title. Titles of some stories give away the plots or endings, whereas others are totally abstract and thought provoking, providing absolutely no clue as to what the story will be about. Either "Frankenstein" or "The Raven" has the best titles out of the three stories that I have read. They give away that the story is about someone named Frankenstein or a raven, but nothing else that would ruin the plot or ending. This is beneficial to the reader, who would be able to get more involved in the story as more of the plot unfolds, particularly in a novel. The title "Man Overboard", tells us that the story is about a man falling overboard. Primarily I considered it could be a metaphor, but after reading the story, I found that it wasn't. A story with a title that gives away the plot has some advantages and disadvantages. Giving away some of the plot could make the reader interested and make him or her want to know how that certain event happened, for example, how the man fell overboard. A lot of the time that is not always what happens. In some cases, the plot is given away too much by the title, which makes the story less exhilarating and impulsive for the reader. ...read more.

The Red Sea is said to be "warm" and the surfaces of the water are "still" but there is one sentence that makes me think of the ocean as a more horrific thing. When it says, "The mail steamer was hurrying through the Red Sea in the hope of making up the time which the currents of the Indian Ocean had stolen" it made me think that if the ocean could steal time, then it could be capable of stealing life. That sentence contains a very powerful metaphor that adds a slight amount of suspense to the otherwise calm settings being described. The moon adds a lot of atmosphere to the setting. Where the moon is hidden behind the clouds in the beginning, it suggests that it will be harder to notice the man falling overboard because there is less light. The moon and clear sky reflect the man's emotions in the beginning. The man is calm when the atmosphere is calm. When the moon comes out from behind the clouds at the end when the shark is moving towards the man, it reinforces that God had heard his appeal and sheds light on the man's last moments. Churchill probably created a calm atmosphere to make the event of the man falling overboard more dramatic because most elements of suspense were removed from the plot in the first line. A contrasting event to the setting it happens in is different to what happens in "Frankenstein" and "The Raven" where the horrific parts of those stories are set in bleak, dark, mysterious locations. For example, when Frankenstein creates his being and gives it life for the first time "it was on a dreary night in November". This tells us that it was in winter when it was cold, there are no leaves on trees and there is less life to witness this terrible crime that Frankenstein was about to commit. ...read more.

She captivated my interest because suspense was always being built up, even in the calmer scenes. Small things were always being given away in those scenes: characters were wondering why Frankenstein was so tired, Frankenstein feared things happening around him and there were many incidents in the story in which Frankenstein wanted to die but couldn't, which always created suspense because I didn't know what was going to happen. I knew he lived through his story because he was telling it on the ship but because he wanted to die, he could have done anything to try and make that possible and things like that always made me want to keep reading. Shelley linked lots of ideas very successfully, which made the story more understandable and clearer even though there were a lot of things to be thinking about when reading. I like the fact that she visited Geneva herself and was able to describe certain locations in the story very well. As she described everything in great detail, it was easy to get involved in the story because it was easier to imagine. I think that is just one of the benefits of writing a novel; novels always contain lots of detail to make the story clearer to the reader so they are able to piece things together easily. In "Frankenstein" there are extreme mood changes and the fact that Frankenstein isn't able to stay happy for a long time because of the monster adds even more horror to the story. Another thing that has also made me realise that "Frankenstein" is a very successful novel is that it is still a frightening story today and I really like the way Shelley used very new ideas at the time of writing this story. If the story has survived this long and still has the same terrifying impact on readers, I think it will continue to be a widely appreciated novel for many years to come. I will certainly remember the horrific images that Shelley produced in my mind whilst I read "Frankenstein". ...read more.