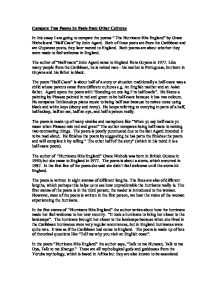 Compare two poems from other cultures

Compare Two Poems by Poets from Other Cultures In this essay I am going to compare the poems " The Hurricane Hits England" by Grace Nichols and "Half Caste" by John Agard. Both of these poets are from the Caribbean and are Guyanese poets, they later moved to England. Both poems are about whether they were made to feel welcome in England. The author of "Half-caste" John Agard came to England from Guyana in 1977. Like many people from the Caribbean, he is mixed race - his mother is Portuguese, but born in Guyana and his father is black. The poem "Half-Caste" is about half of a story or situation traditionally a half-caste was a child whose parents came from different cultures e.g. An English mother and an Asian father. Agard opens the poem with "Standing on one leg I'm half castle". He likens a painting by Picasso painted in red and green to be half-caste because it has two colours. ...read more.

"It took a hurricane to bring her closer to the landscape". The hurricane brought her closer to the landscape because when she lived in the Caribbean hurricanes were very regular occurrences, but in England hurricanes were quite rare. It was as if the Caribbean had come to England. The poem is made up of lots of rhetorical questions like "Tell me why you visit an English coast". In the poem "Hurricane Hits England" the author says, "Talk to me Huracan, Talk to me Oya, Talk to me Shango." These are all mythological gods and goddesses from the Yoruba mythology, which is based in Africa but they are also known to be associated with the Caribbean. Oya is the goddess of the river Niger, which is in Africa, this fact and the Yoruba mythology figures hints to us that the person traveling by boat has maybe originated from Africa. The author could be related to slaves, which could have been brought over from Africa to work in the rice fields of British Guiana. ...read more.

The hurricane that woman witnessed was very violent and destructive, yet it has created something positive inside the woman and given her hope of being accepted in her new homeland. She finds the hurricane liberating as well as disturbing: she "rides the mystery" of the storm, and feels that a "frozen lake" inside her is being broken up. The author is very effective in explaining how worried she is moving to a completely strange country. The "Half-Caste" poem talks about what does half-caste mean? John Agard tries to get the point across that half-castes are perceived as half a person, but later in the poem the author says they are in fact a whole person. The poem relies on comparisons to make us see how wrong it is to judge things that are in contrasting colours as only "half" worthy. He uses examples of great and famous artists like Picasso and Tchaikovsky. The author is effective in describing that half-castes are not "half a person" and how he dislikes the phrase half-caste. ...read more.