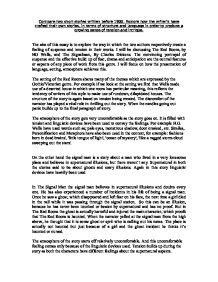 Compare two short stories written before 1900. Explore how the writer's have crafted their own stories, in terms of structure and language in order to produce a growing sense of tension and intrigue.

Compare two short stories written before 1900. Explore how the writer's have crafted their own stories, in terms of structure and language in order to produce a growing sense of tension and intrigue. The aim of this essay is to explore the way in which the two authors respectively create a feeling of suspense and tension in their works. I will be discussing The Red Room, by HG Wells, and The Signalman, By Charles Dickens. The convincing portrayal of suspense and the effective build up of fear, drama and anticipation are the central features or aspects of any piece of work from this genre. I will focus on how the presentation of language, setting, atmosphere achieves this. ...read more.

The discomfort of the narrator has played a vital role in thrilling out the story. When the candles going out panic builds up to the final paragraph of story. The atmosphere of the story gets very uncomfortable as the story goes on. It is filled with tension and linguistic devices have been used to convey the feelings. For example H.G. Wells have used words such as; pale eyes, monstrous shadow, door creaked, etc. Similes, Personification and Metaphors have also been used in the context, for example: fashions born in dead brains', 'little tongue of light', 'ocean of mystery', 'like a ragged storm cloud sweeping out the stars'. ...read more.

So this can be an illusion, because he has never been touched or beaten by supernatural and has no proof. But in The Red Room the ghost is actually harmful and injured the main character, which proofs that The Red Room is haunted. When the narrator yelled at the signal man from the high above, he thought that it is some ghost or sprit who is calling out his name. The place is actually not haunted but just because of a girl and the ghost incident he thinks it's haunted or cursed. The atmosphere of the story starts off relatively uncomfortable. And this uncomfortable feeling comes only because of the linguistic devices used. Tension builds up during the story as both the characters have different feelings about the supernatural aspects. ...read more.