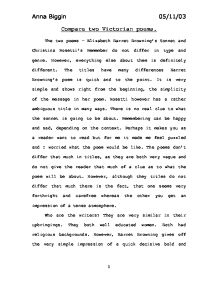 Compare two Victorian poems. The two poems - Elizabeth Barret Browning's Sonnet and Christina Rosetti's Remember do not differ in type and genre. However, everything else about them is definitely different. The titles have many differences Barret Browning's poem is quick and to the point. It is very simple and shows right from the beginning, the simplicity of the message in her poem. Rosetti however has a rather ambiguous title in many ways. There is no real clue to what the sonnet is going to be about. Remembering can be happy and sad, depending on the context. Perhaps it makes you as a reader want to read but for me it made me feel puzzled and I worried what the poem would be like. The poems don't differ that much in titles, as they are both very vague and do not give the reader that much of a clue as to what the poem will be about. However, although they titles do not differ that much there is the fact, that one seems very forthright and carefree whereas the other you get an impression of a tense atmosphere. Who are the writers? They are very similar in their upbringings. They both well educated women. Both had religious backgrounds. However, Barret Browning gives off the very simple impression of a quick decisive bold and brave woman, whereas Rosetti gives of the dominated and shy woman who was living her life In 1800s when this poem was set. ...read more.

Almost as if she was planning her funeral. This is where the two show there true differences and the very two different types of love they are both experiencing. Barrett Browning is experiencing the idealistic my love will last forever. Whereas Rosetti is experiencing controlled abused and unsatisfied love. The two poems have totally different imagery which gives off a certain showing of the difference of meanings. There is a difference between Rosetti's sad religious mix emotions and Barrett-Browning's showing of definite love, tender, passionate and flawless love imagery. One hand there is happiness of love and on the other there is a depressing and the real story of what love was like in those days in the eyes of a woman forced to love a man so controlling a woman has no say in the future plans - "the future that you planned" the words that mean so much. It shows her bitterness and it sets the tone of bitterness throughout the rest of the poem. "You" not we not I, why? She is so controlled yet how is it she is so clever to realise it? She has to use the poem as a vent for her feelings. She does not hate him but she has lost her love. The two poems languages are very odd they have similarities as they are both set at the same time, there is no colloquial language, everything is written down in proper English. ...read more.

Rosetti however, is more mature and is not there for love, but because she has been forced to comply. The two men in these sonnets are just as different as the writers. You get no inkling into what Barrett-Browning's man looks like only the fact that there is a returning love, otherwise why write the poem? Whereas, Rosetti's man is a conventional nineteenth century male, who believes he rules the household and that a woman's place is in the home. I felt happiness and a sustaining portrait of love when I read Elizabeth Barrett-Browning's sonnet. Yet when I read Christina Rosetti's I felt melancholy and of darkness of love in the nineteenth century. I was intrigued to find out why anyone could put themselves through that anguish. Then I realised if she left him she would be a disgrace. Her family would not accept her and she would have to resort to something much worse. The constant reminder in her poem of forgetting made me think maybe she feels he is forgetting her. The poem is sarcastic and bitter yet to a great extent saddening. Elizabeth Barrett-Browning's poem was heart warming and it felt too good to be true as though there was a catch. Both poems show the nature of love the two types of love. The two ways of love changing and how people change. One forced and one loving relationship. Every person is devoted in some way or another. In Barrett-Browning's case there is devotion to each other but in Rosetti's case there is the devotion to please the man and the man mentioned to be a devoted conventional man of the Victorian period. Anna Biggin 05/11/03 1 ...read more.