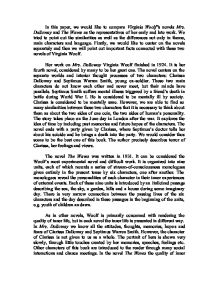 Compare Virginia Woolf&quot;s novels Mrs. Dalloway and The Waves as the representatives of her early and late work.

In this paper, we would like to compare Virginia Woolf"s novels Mrs. Dalloway and The Waves as the representatives of her early and late work. We tried to point out the similarities as well as the differences not only in theme, main characters and language. Firstly, we would like to center on the novels separately and then we will point out important facts connected with these two novels of Virginia Woolf. Her work on Mrs. Dalloway Virginia Woolf finished in 1924. It is her fourth novel, considered by many to be her great one. The novel centers on the separate worlds and interior thought processes of two characters: Clarissa Dalloway and Septimus Warren Smith, young ex-soldier. These two main characters do not know each other and never meet, but their minds have parallels. Septimus Smith suffers mental illness triggered by a friend's death in battle during World War I. He is considered to be mentally ill by society. Clarissa is considered to be mentally sane. However, we are able to find so many similarities between these two characters that it is necessary to think about them as about the two sides of one coin, the two sides of human's personality. ...read more.

Most of the characters make compromises. At the end of life they are not sure that the compromise is the right think to do. They are evaluating their lives. In the novel The Waves, different episodes of the life are presented to us from different points of view, but they are expressed in the absolutely same language. This fact is very striking. We would say that a lot of dissatisfaction can be found here. Although these characters are presented as friends, they are jealous to each other, when they speak to each other they pretend that they are different, they feel themselves to be completely misunderstood. One minute they love each other and then they hate each other. Although their relationship has changed a lot in the course of time, they try to pretend that nothing changed. Is this the real reflection of human's thoughts? Virginia Woolf brought into this book the characters whose difference can substitute the plot. It is very interesting how Virginia Woolf chooses characters for her books. In The Waves and Mrs. Dalloway there can be found characters that represents the opposite pole of personalities. We have already mentioned Clarissa Dalloway and Septimus Smith. ...read more.

Dalloway buys to his wife flowers of red and white roses to tell her how he loves her. On the other hand, Peter Walsh has no sense of beauty. The flowers are for him same as vegetable. There, the difference between Mr. Dalloway and Peter Walsh is shown. In both her novels there is one question asked. The question important for Virginia Woolf. What is love? Or to say it more precisely: What is real love? In her novels we can see how the author is trying to find the answer. In Mrs. Dalloway there is problematic and very intensive relationship between Clarissa and Sally Seton, in The Waves of Bernard and Percival. Virginia Woolf tries to introduce all the aspects of love as well as these ones that were forbidden. To sum up, we would like to say that in these two novels of Virginia Woolf, many similar facts as well as the different ones can be found. However, Mrs. Dalloway is easier to read; it is easier to understand. We would say that Mrs. Dalloway is the real masterpiece of Virginia Woolf. In The Waves Virginia Woolf shows us that no rules must be followed. It is pure experimental work and the reader of this novel must be more experienced. ...read more.

This student written piece of work is one of many that can be found in our GCSE Ian McEwan section.