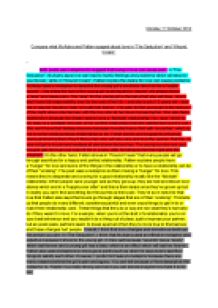 ﻿Monday 1st October 2012 Compare what McAuley and Patten suggest about love in ?The Seduction? and ?Wound Cream? Both poets use metaphors to suggest that being in love can cause pain. In ?The Seduction?, McAuley says love can lead to hurtful feelings and problems which will stay for you forever, while in ?Wound Cream?, Patten implies the desire for love can cause problems. McAuley uses a metaphor to describe the young girl?s emotions which is like a ?septic wound?. This infers the hurt of the young girl is strong and a ?wound? will always leave a ?scar? and cause pain. The ?scar? for the young girl is the baby that she will have, which she?ll have full responsibility over for the rest of her life ? and she is only 15 years old ? just like a ?wound? leaves a ?scar? it is with her forever. The pain for the young girl is the memory of the night where she had sex with the boy who let her down by leaving her. She also feels heartbroken because her dream was to have a ?fairytale? relationship. Her ?scar? which is her baby is a constant reminder of her perfect relationship that she wanted but now it?s over. ...read more.

Overall, I think that love changes and sometimes destroys the person you are. In ?The Seduction?, I think that McAuley used an effective metaphor and adjective because it linked to the young girl. It links well because ?wounds? leave ?scars? which last forever and a young girl has a baby which is an effect which will last her forever. Patten also uses metaphors to show good points such as when he says lovers sacrifice things to satisfy each other. However, I prefer McCauley?s metaphor because there are many reasons behind the girl?s pain and agony. You can tell because of how descriptive the metaphor is. ?Septic? is a really strong word and you can almost imagine how hard it is for her. McAuley and Patten then go on to imply that love is promoted in a misleading way. In ?The Seduction?, McAuley says that the media portrays love much more differently to how it is in reality, and this leads to misery; whereas Patten says the media shows all the advantages of being in love, but not any of the disadvantages. McAuley uses a metaphor to show the girls heartache after the young boy betrayed her and she realises she won?t have the perfect relationship that her magazines show. ...read more.

This causes problems in later life because these stories influence them and then they feel betrayed and misled and realise it?s all lies when they can?t find a perfect relationship for themselves. Patten?s quote tells us the media does not show the disadvantages of a relationship because he says the media?s portrayed relationship is ?gutted of darkness?. ?Gutted? means to take away and ?darkness? is a metaphor for the problems of the relationship. This represents that the media clears away and doesn?t show or the mention the problems between the couple which misleads people because they think a relationship or marriage has no problems to be dealt with. In conclusion, I think that McAuley chose a very good metaphor because the word ?confetti? can relate and link to many problems of her situation. I think in ?Wound Cream? Patten?s quote wasn?t very exact because not every story in the media portrays that love has a ?happily ever after?. Only fairytales do but in many movies they don?t have happy endings. Patten could have made it clearer if he was talking about just fairytales or all types of media. ...read more.