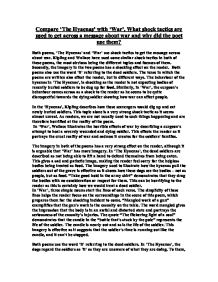 Compare 'The Hyaenas' with 'War'. What shock tactics are used to get across a message about war and why did the poet use them? Both poems, 'The Hyaenas' and 'War' use shock tactics to get the message across about war. Kipling and Wallace have used some similar shock tactics in both of these poems, the most obvious being the different topics and focuses of them. Secondly, the imagery in the two poems has a shocking effect on the reader. Both poems also use the word 'it' referring to the dead soldiers. The tense in which the poems are written also effect the reader, but in different ways. The behaviour of the hyaenas in 'The Hyaenas', is shocking as the reader is not expecting bodies of recently buried soldiers to be dug up for food. Similarly, in 'War', the surgeon's behaviour comes across as a shock to the reader as he seems to be quite disrespectful towards the dying soldier showing how war can affect people. In the 'Hyaenas', Kipling describes how these scavengers would dig up and eat newly buried soldiers. This topic alone is a very strong shock tactic as it seems almost unreal. As readers, we are not usually used to such things happening and are therefore horrified at the reality of the poem. ...read more.

To them, the bodies are just an easy source of food, nothing more nothing less. This can make the reader angry that the soldiers are being referred to in this way, as it is considered disrespectful. Kipling has used this shock tactic, not to show how awful the hyaenas are, but to show that it is our fault that this is happening and exactly what war does. Similarly, in 'War', the word 'it' is used by the surgeon referring to the nameless body. Wallace has used this word to emphasise the fact that the surgeon goes through these similar stages every day and is therefore used seeing people die regularly. It may seem to the reader that the surgeon does not have any respect for the soldier by naming him 'it' but in fact, the reasoning for Wallace to choose this tactic is significant. Calling the soldier 'it' instead of 'him' illustrates the fact that the surgeon's attitude towards his patients has been changed by the war. It implies that once the soldier is dead, he is no longer important or worth worrying over as it happens all the time. However, the author of the poem does not want the reader to hate the surgeon, but he wants the reader to see what war does to people other than the soldiers and how it changes them. ...read more.

In 'War' the surgeon has no relationship with the patient and does not seem to treat him as a person. This may shock the reader into thinking how callous the surgeon is and how uncaring he is towards his patients. However, I think that the surgeon has been portrayed in this way to show the damaging effects the war has on people. If the surgeon familiarised with every patient he would suffer from loss when a patient dies, and perhaps this 'inhumane' behaviour is to take his mind off of the reality of war. When he says "Orderly, clean this knife!" the reader is shocked to see how the surgeon reacts after the death of his patient. It seems that the death has no effect on him at all and shows no emotion. This behaviour also implies that he has become used to seeing soldiers die. Wallace has chosen for the surgeon to behave in this way, again to show how war affects not only the soldiers, but others too and what a cruel affect it has on them. In conclusion, the shock tactics used by Kipling and Wallace in these two poems help convey the effect war has on people and how we as humans are to blame for it. These messages are expressed through, the topic of the poems, the behaviour of the characters, the imagery used, the tense in which they are written and the choice of words. ...read more.