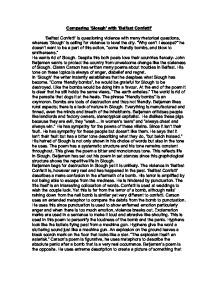 Comparing 'Slough' with 'Belfast Confetti' 'Belfast Confetti' is questioning violence with many rhetorical questions, whereas 'Slough' is calling for violence to level the city. "Why can't I escape?" he doesn't want to be a part of this action, "come friendly bombs, and blow to smithereens." He wants rid of Slough. Despite this both poets love their countries fiercely- John Betjeman wants to protect the country from unwelcome change like the staleness of Slough. Ciaran Carson has written many poems about troubles in Belfast. His tone on these topics is always of anger, disbelief and regret. In 'Slough' the writer instantly establishes that he despises what Slough has become. "Come friendly bombs", he would be grateful for Slough to be destroyed. ...read more.

His hatred of Slough is not only shown in his choice of words but also in the tone he uses. The poem has a systematic structure and his tone remains constant throughout. This gives the poem a bitter and monotonous tone. This reflects life in Slough. Betjeman has set out his poem in set stanzas since this graphological structure shows the repetitive life in Slough. Betjeman begs for destruction in Slough yet it is unlikely. The violence in 'Belfast Confetti is, however very real and has happened in the past. 'Belfast Confetti' describes a mans confusion in the aftermath of a bomb. His terror is amplified by not being able to escape from the madness. He is hindered by punctuation. ...read more.

An explosion on the ground leaves a black scorch mark on the floor that looks like a star. "The explosion itself- an asterisk." Carson's poem is figurative, he uses metaphors to describe the absolute panic after a bomb that is a very real occurrence. Betjeman's poem is the opposite. He uses extreme description to create a picture of something that could never happen. Betjeman and Carson are merely voices in a world we cannot control; we but observe senseless violence occurring around us. Both poets lose control in their poems, "Why can't I escape?", "I was trying", "It's not their fault they do not know", "The earth exhales." In all of these, things are happening that cannot be stopped or aided by the poet. At first glance there appears to be no rhythm or rhyme in 'Belfast Confetti' this is because in stressful situations there is no order. Unlike this in 'Slough' has a very repetitive structure. ...read more.