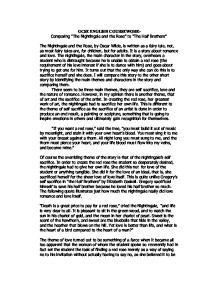 GCSE ENGLISH COURSEWORK- Comparing "The Nightingale and the Rose" to "The Half Brothers" The Nightingale and the Rose, by Oscar Wilde, is written as a fairy tale, not, as most fairy tales are, for children, but for adults. It is a story about romance and love. The nightingale, the main character in the story, overhears a student who is distraught because he is unable to obtain a red rose (the requirement of his love interest if she is to dance with him) and goes about trying to get one for him. It turns out that the only way she can do this is to sacrifice herself and she does. I will compare this story to the other short story by identifying the main themes and characters in the story and comparing them. There seem to be three main themes, they are self sacrifice, love and the nature of romance. However, in my opinion there is another theme, that of art and the sacrifice of the artist. In creating the red rose, her greatest work of art, the nightingale had to sacrifice her own life. This is different to the theme of self sacrifice as the sacrifice of an artist is done in order to produce an end result, a painting or sculpture, something that is going to inspire emotions in others and ultimately gain recognition for themselves. ...read more.

In fact, it is quite unpractical, and, as in this day and age to be practical is everything, I shall go back to Philosophy and study Metaphysics." The tragic end of the nightingale and the subsequent complete lack of emotion on anyone's part are completely different from the ending of the Half Brothers. When Gregory died it made people realise just how much more worth he had than they had previously thought. People at least honoured his memory for the great, selfless and brave deed that he had done. The Nightingale was not afforded that luxury. This is a huge contrast between the two stories. In Gaskell's story love is the supreme factor, quite unlike in Wilde's where the nightingale's gesture is wasted and in the end unsuccessful. The Half Brothers by Elizabeth Gaskell is, by contrast to Wilde's fairy tale, a story filled with an abundance of human tragedy, the only relief from which is the joy of a mother's love for her child. Helen, the mother of Gregory and his stepbrother, is married young. However her husband and first child die and she has to look after the newly born Gregory with just the help of her sister, Fanny. ...read more.

The Nightingale is too na�ve to realise this and sacrifices her own life for nothing in the end. Although the Nightingale's death is very sad for the readers, the characters in the story do not even know of her existence but the treatment of the rose at the end seems to symbolise how little they would have cared that the Nightingale sacrificed her life for the rose. Gregory, however, sacrificed his life for the best possible reason, to save the life of another. As I have said before, the Nightingale sacrificed herself for the love of an intangible ideal; Gregory gave up his life because of the love (to an extent- unrequited love) he had for his stepbrother. It is very unlikely that the stepbrother would have had either the sense or the heart to do the same for Gregory. Also, the Nightingale's death went basically unnoticed, her legacy- the red rose was treated incredibly badly and strewn in the road whereas Gregory's death was the result of probably the most important thing he did during his lifetime, and his legacy- Lassie, was treated very well. This is an important difference in these stories: it shows the change of peoples' opinions towards Gregory and the newfound respect and love they had for him when his sacrifice became known. By contrast, the nightingale's sacrifice was not only unnecessary, it was also completely unrecognised. Chris Bell 10S ...read more.